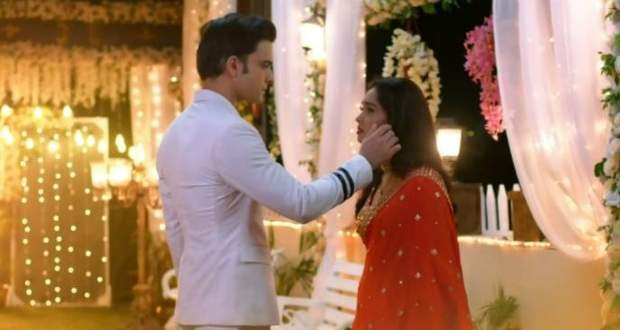 Today's Kumkum Bhagya 10th June 2022 episode starts with Prachi forgiving Ranbir for his mistakes and wiping his tears as she embraces him.

Ranbir gets emotional and hugs Prachi tightly after she tells him that he is going to be a father soon.

With tears in his eyes, Ranbir promises to love Prachi and their child till his death and take care of them.

Prachi wears the ring presented by Ranbir and agrees to make a fresh start in their life.

As Prachi remembers Rhea’s sullen face, she tells Ranbir happily that he has done the right thing by deciding to divorce her.

Ranbir fiddles in nervousness and reveals that he has not told Rhea yet that he wants to divorce her.

Hearing this, Prachi erupts in anger and throws away the ring given by Ranbir earlier.

Grabbing Ranbir by his collar, Prachi compliments Ranbir’s strategy of coming to her for the baby while he is still Rhea’s husband.

Ranbir tries to explain to Prachi but she pushes Ranbir away and begins to walk away.

However, on her way, Prachi trips on her footing and lands on her stomach with a loud thud while shouting for her baby.

Just then, Ranbir wakes up from his imagination and finds himself still in the room with Prachi.

Everything proceeds exactly as he had seen in his dream, making Ranbir nervous.

Ranbir runs away from the window leaving behind Prachi with a confused face.

Meanwhile, Stanley cleverly tricks Rhea and Pallavi and succeeds in escaping from that room without getting caught.

Ranbir searches for the divorce papers which eventually land in Rhea’s hands.

As Prachi comes to check on Dida and finds her in that state, Pallavi tries to insult Prachi but gets stopped by Dida.

Dida threatens to jump from the window if Prachi does not teach Pallavi and Rhea a lesson.

After Prachi talks a bit about Pallavi’s behavior towards her, Dida comes down and sleeps on the sofa.