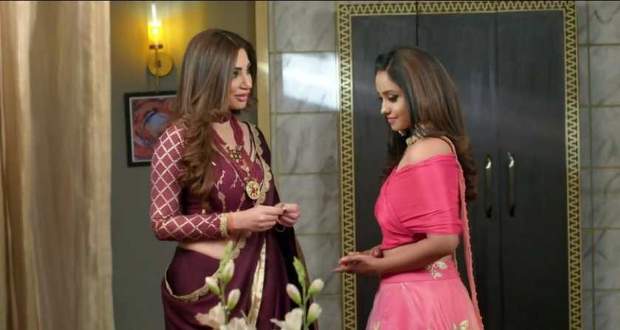 Today's Kumkum Bhagya 10th March 2022 episode starts with Aaliyah commanding Rhea to mix the tablets in Ranbeer’s thandai which will make him drowsy for the next 10 mins.

Rhea thanks Aaliyah for her help and goes out to search for Ranbeer.

Meanwhile, Ranbeer and Prachi get chummy together sharing some sweet comments between them.

Vikram indulges in drinking bhaang to his heart’s content and loses control over his consciousness causing a commotion in front of all the guests.

Pallavi comes to Vikram’s aid and snatches his glass from him, denying him to drink anymore.

Seeing Pallavi and Vikram’s sweet and sour argument, Prachi and Ranbeer admire them from afar and admit the loves that reside between the pair.

Ranbeer asks Prachi if she will take care and love him as Pallavi does for Vikram to which Prachi runs away in embarrassment without answering.

Finding Ranbeer alone, Rhea comes to him with the glass of drugged thandai and offers it to him.

However, Vikram snatches away the glass from Ranbeer and drinks it instead.

After Ranbeer gets busy handling Vikram, Rhea loses the tablet while taking it out and finally adds the third and last tablet in a new glass.

As she offers the drugged glass to Ranbeer, the glass crashes on the ground amid the chaos caused by Vikram.

Aaliyah, being the clever one, finds the lost tablet and finally succeeds in making Ranbeer drink the drugged thandai.

Seeing Ranbeer talking with Rhea, Prachi sulks in jealousy and walks off from there with Ranbeer following him.

While Ranbeer tries to convince Prachi by buttering her, the drug takes its toll on his mind and he starts a dance in the state of absolute drowsiness.

Vikram joins Ranbeer in the dance and both father-son makes the whole crowd groove to the beats of the song.

Suddenly, the police enter blaming Aaliyah for an accident caused by her car.

Prachi comes into her room and takes the medicine to sleep as she was feeling dizzy, Ranbeer also comes into the room and sleeps beside Prachi in his drugged state.