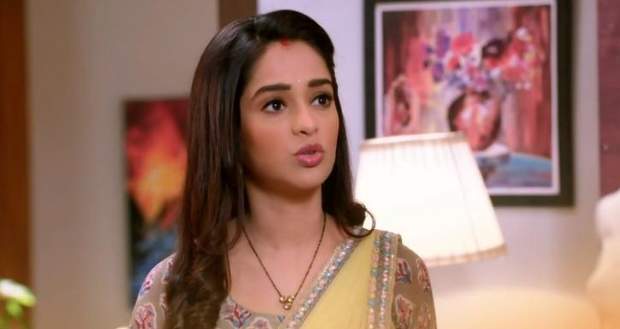 Today's Kumkum Bhagya 10th May 2022 episode starts with Pallavi meeting Ranbir to talk about his behavior change and trying to instigate him against Prachi.

Ranbir tells Pallavi that his life starts and ends with Prachi who has refused to love him back, so he cannot be heartless.

Pallavi insists to Ranbir that Prachi is not the one for him and gives the example of Rhea who cares for them.

Conveying her dissatisfaction, Pallavi tells Ranbir that she does not want Prachi in that house.

Ranbir replies that Prachi will live in that house unless it is her wish but notices that Pallavi has already left.

After some time, Prachi spots Ranbir going outside and follows him while wondering about the reason.

Prachi sees Ranbir meeting with another person and tries to figure out what he is hiding from the whole family.

However, Ranbir asks Prachi to come out as he already knows that she has been following him the whole way.

Ranbir discloses the private detective whom he was meeting so that he can investigate the accident that took place in the house.

Hearing that, Prachi gets furious and taunts Ranbir for helping her when earlier he said that he will not do anything.

Ranbir makes it clear that he is doing everything for himself but gets engaged in an argument with Prachi.

Pallavi comes into the living room hearing the noise and calls Prachi insolent for behaving so rudely.

Spitting straightforward words, Prachi asks Ranbir why he married Rhea to which Ranbir answers that it is because she left him.

Prachi expresses her dissatisfaction towards Ranbir and Pallavi as they never came to see her when she left the house in anger.

Pallavi threatens Prachi to shut up or else her hand will rise on her which triggers both Ranbir and Vikram.

Later, Vikram suggests Ranbir leave this house with Prachi but Ranbir tells him about Prachi’s decision not to do so.

Sahana tells Prachi not to judge Ranbir as a bad person just because there are problems going on between them.