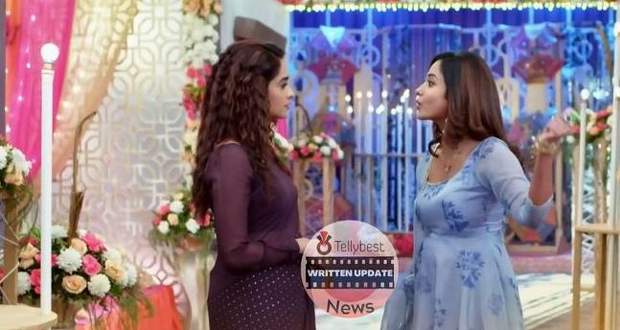 Today's Kumkum Bhagya 10th November 2022 episode starts with Prachi and Ranbeer staring into each other's eyes while Prachi searches for her earring.

Ranbeer then takes the earring from Prachi and helps her wear it and tells Prachi she is looking beautiful.

Prachi suddenly gets a call from the doctor, who tells Prachi that she has sent Rhea's report to her.

Ranbeer asks Prachi who called her, but Prachi leaves without answering.

He runs after Prachi and tells her he wants to say something.

Ranbeer responds by saying that later he won't have the right and tells Prachi point blank that he doesn't want Prachi to marry Sid.

Suddenly, Pallavi asks Prachi to clarify to the journalists that she didn't have an extramarital affair with Sid as she is marrying Sid.

Pallavi further tells Prachi to tell the journalists that she is happily marrying Sid.

Prachi then tells the media persons that she is in fact marrying Sid and they didn't have an extramarital affair.

Ranbeer on the other hand is unable to watch this as he fills up with despair and looks at Prachi longingly.

Meanwhile, Rhea is arguing with Alia because Alia brought Mihika to the Kohli house.

Alia then tells that a waiter is holding a gun that is pointing at Mihika and the waiter will shoot Mihika if she attempts to flee.

Rhea tells Alia that she feels Prachi will win as she is very overconfident about winning.

Aryaan comes over and snatches the glass from Ranbeer's hands.

Ranbeer then tells Aryaan that he is becoming hopeless about getting Prachi back.

Prachi then comes over to Ranbeer and takes away his glass.

Ranbeer asks Prachi to show her concern elsewhere as he isn't interested.

Ranbeer also tells Prachi to not stop him from drinking as he is not stopping her from getting married.

Prachi upon hearing this breaks the glass on the floor.

Ranbeer tells Prachi to dance and sing at her sangeet and not bother him.

Prachi then says she doesn't want to marry Sid as she married Ranbeer because she loves Ranbeer.

Prachi and Ranbeer are both shocked at Prachi's revelation.

Rhea instigates Pallavi against Prachi saying Prachi is jealous of Rhea and therefore is stealing Ranbeer.

Prachi then shuts Rhea up and tells her that she isn't carrying Ranbeer's child, as Rhea isn't pregnant at all.

Alia coerces Sid to tell everyone that he is marrying Prachi because he impregnated her.

However, Shahana tells everyone how Alia is threatening Sid by harming Mihika.

Sid then comes forward and agrees with Prachi.

Alia then says that Mihika will die.

© Copyright tellybest.com, 2022, 2023. All Rights Reserved. Unauthorized use and/or duplication of any material from tellybest.com without written permission is strictly prohibited.
Cached Saved on: Monday 21st of November 2022 03:18:04 AMCached Disp on: Friday 9th of December 2022 04:59:50 AM