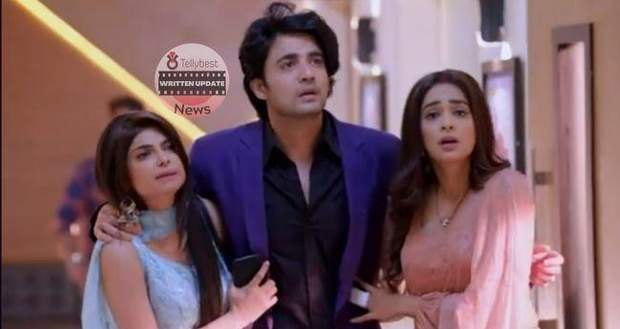 Today's Kumkum Bhagya 10th October 2022 episode starts with Aryan searching for Ranbir as he does not want Ranbir to know that Sahana and Prachi are there with Sid.

On his way, Aryan bumps into Sahana who blames him for walking like a blind person.

Aryan also blames Sahana for walking like a blind person despite having eyes and says it is her fault for colliding with him.

Following Sahana, Aryan reaches Sid and gets irritated as he sees Sahana being extra caring toward Sid.

Aryan asks Sahana why she is being so soft toward Sid when he is the one who is destroying several lives including his sister’s.

Sahana warns Aryan that he is exceeding his limit but Aryan instead asks Sahana why she is on Sid’s side who does not even care about his own sister.

Hearing this, Sahana’s patience runs out and she tells Aryan that Sid is risking his everything for the sake of Mihika.

Sahana tells Aryan that Rhea and Alia have kidnapped Mihika and are blackmailing Sid to declare Prachi’s child as his if he wants to save Mihika’s life.

Just then, Ranbir, Prachi, and Rhea walk into the scene and Rhea screams in frustration seeing her cover blown out.

Rhea threatens Sid that she will destroy his life and calls someone and orders them to kill Mihika.

Sahana apologizes to Rhea saying that it is her fault that she spoke without thinking much.

Suddenly, Sahana snaps out of her dream (Literally the nth time) while chanting “I am sorry” by herself.

Meanwhile, Ranbir and Prachi enter the doctor’s cabin and ask Rhea what she is discussing with her.

Dr. Madhu saves the situation by stating that Rhea has some complications in her pregnancy and needs more extensive care.

Prachi secretly clicks pictures of the reports on the table while the doctor checks on Rhea.

Rhea thanks Dr. Madhu for covering up and promises to behave properly toward her next time.

Aryan says that he forgives Sahana as he mistakes Sahana’s apology directed at him.

This causes another argument between Sahana and Aryan where Aryan questions Sahana’s sincerity seeing her in Sid’s favor.

Accidentally, Sahana utters that all is happening because of Alia which stirs up Aryan even more.

As Sahana is about to spill everything, Sid stops her and asks her to take him away from there at the earliest.

Just then, Ranbir, Prachi, and Rhea come there and all of them leave the hospital together.

Prachi calls the spa and confirms if Rhea has an appointment in reality or not.

Rhea sits beside Ranbir in his car while he was waiting for Prachi and begins to tell him that she is happy to see him care for her.

Ranbir completely ignores Rhea and gets out of the car asking Aryan to drive his car back home.

Instead, Ranbir takes Aryan’s car and asks Prachi to come with him so that he can drive her home.

© Copyright tellybest.com, 2022, 2023. All Rights Reserved. Unauthorized use and/or duplication of any material from tellybest.com without written permission is strictly prohibited.
Cached Saved on: Monday 21st of November 2022 06:15:46 AMCached Disp on: Saturday 10th of December 2022 03:33:29 PM