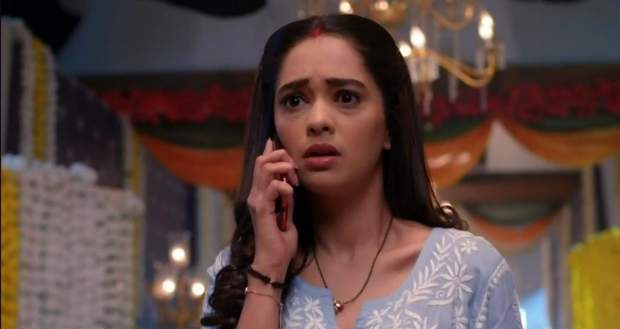 However, due to Nick’s fake appearance, Ranbeer fails to identify him and walks inside the police station with Nick following him.

Inside the police station, the police officer informs Ranbeer that they have found Nick and his whereabouts and will raid there soon.

Nick gets anxious about seeing the police discovering his information and asks for Prachi’s number from Preeti.

As Prachi searches for Ranbeer, she gets a call from Nick who threatens her to keep Ranbeer under check or else he will have to die.

Prachi freezes in her spot on hearing Nick’s words and gets nervous as she thinks about something happening to Ranbeer.

Meanwhile, Rhea and Aaliyah proceed on their way to fetch the money while getting followed by Sahana.

At the same time, Ranbeer receives Prachi’s call while on his way to Nick’s house along with the police.

Prachi asks Ranbeer to come home as soon as possible but Ranbeer refuses to leave from his quest for the culprit.

Ranbeer and the police reach the house and search it thoroughly only to fail to find anything suitable.

However, they discover a CCTV camera outside and decide to check the footage after getting permission to access it.

On the other hand, Prachi messages Ranbeer that she is gravely injured which makes Ranbeer leave for the house in a hurry.

Aaliyah and Rhea come back from the bank after getting the cash while Sahana continues to follow them closely.

Nick enters the house and meets with Rhea and Aaliyah but the presence of Sahana creates a discrepancy.

Anxious about being discovered, Nick hurriedly hides inside the cupboard with Rhea locking it from outside.

Ranbeer comes back and discovers Prachi lying to him which makes him get extremely angry with her.

However, Prachi succeeds in stopping Ranbeer from leaving the house at last.