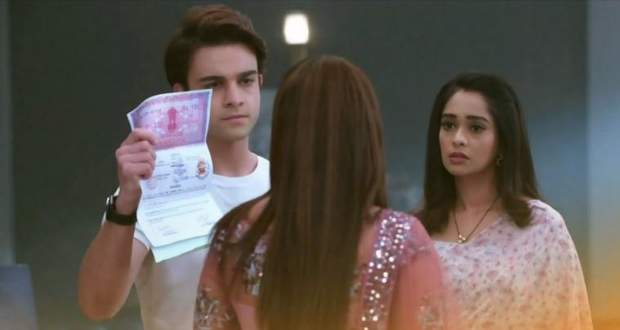 Prachi and the rest of the family is shocked to hear Rhea’s new allegation.

Ranbir shouts at Rhea for accusing Prachi while Rhea tells Ranbir with equal confidence and tells him that Sid is the father of Prachi’s child.

Dida shames Rhea for putting an allegation about Prachi and she feels like throwing her out of the house right this minute.

Just then Prachi comes to Rhea and slaps her and tells Rhea that she will not stand any abuse against her child.

Rhea tells Prachi that she had tried to keep her secret as a sister and told her many times to leave the house but someone always stopped her.

Rhea also tells Prachi that she loves this family as she loves Prachi and cannot see Prachi fooling them and that is why she had to speak up and tell the truth that Prachi is carrying Sid’s illegitimate child.

Ranbir tells Rhea that he will not believe her no matter what she says as he trusts Prachi completely.

Just then Aliya gives Rhea photographs and a Pendrive to show as evidence of Prachi’s digressions.

Ranbir denies those proof as well and tells Rhea that he still will not believe her.

Rhea tells Ranbir that she has called someone here who will prove to him that Sid and Prachi had an affair and that Prachi’s child belongs to Sid.

Prachi looks at Rhea aghast while Rhea continues to soil Prachi’s character and also tells about Sid's arrival at the party and meeting with Prachi privately.

Prachi tells her to not cross her limits in putting allegations on her.

Meanwhile, a waitress of the hotel arrives at the house and shows hotel records and CCTV footage pics to everyone to make them believe the truth.

However, Ranbir sends her packing saying that he does not want to listen to her anymore.

Vikram calls Sid and asks him to come to the house wherever he is.

In the meantime, Ranbir asks everyone to submit their phones and disconnect all landlines and prohibits everyone from leaving the house so that no one contacts and manipulates Sid.

© Copyright tellybest.com, 2020, 2021. All Rights Reserved. Unauthorized use and/or duplication of any material from tellybest.com without written permission is strictly prohibited.
Cached Saved on: Saturday 1st of October 2022 09:01:48 PMCached Disp on: Sunday 2nd of October 2022 11:28:57 AM