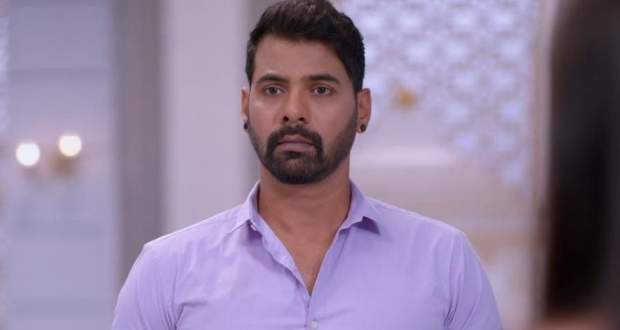 Today's Kumkum Bhagya 11 February 2021 episode starts with Abhi searching for Pragya while Ashok's wife, Varsha leads him the away from the unconscious Pragya.

Meanwhile, the Pandit tells Baljeet and Saritha that if any hurdle coming in the Pooja for the next 8 hours that Abhi and Pragya will be in danger.

Varsha locks Pragya in the storeroom while Ashok's mother takes Abhi away from there.

Ashok's mother calls him and tells him to come fast while he tells her that he is coming soon.

Abhi hears Pragya calling to him and she informs him that Ashok and the shooters are families and that they are trapped.

He is about to break the door when suddenly Ashok's mother amd Varsha comes there and starts hitting him with a metal rod.

Abhi tells them that he does not hit women and to leave him while Pragya tells him from inside to not get beaten by women.

Abhi comes inside and informs Pragya that he has tied the ladies with their dupatta's while she hits him.

Abhi tries to call Purab but realises that the sim card is missing and thinks that Ashok took it when he broke the phone.

He tells Pragya that maybe Ashok's sister is not involved as she wanted to tell them something but couldn't.

They go through the window while Varsha and Ashok's mother free themselves and look at them going.

Ashok, Killer and Snake come there with the other goon while Killer gets his leg fractured.

Varsha informs Ashok about the couple eloping and he goes to the car with Killer and the other goon.

Abhi and Pragya manage to get away in their car due to Ashok's mistake which angers Killer.

Ashok hears a gunshot and goes inside to see his wife dead while his mother informs him that Killer was angry and wanted to kill her but Varsha took the bullet.

The couple is on the road while Pragya gets shocked seeing the goon coming after them in the jeep.

© Copyright tellybest.com, 2020, 2021. All Rights Reserved. Unauthorized use and/or duplication of any material from tellybest.com without written permission is strictly prohibited.
Cached Saved on: Tuesday 20th of April 2021 06:03:30 PM