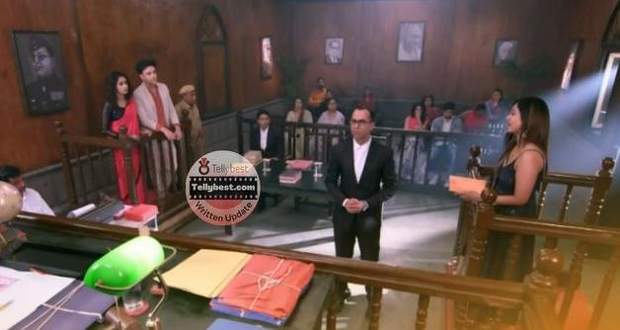 Rhea reminds that along with Ranbeer and Prachi, they would have done rounds of the courts and they would not have gotten anything from it.

Alia counters that they would have charged Ranbeer with domestic violence and would have gotten alimony from him but Rhea destroyed everything by taking back the case.

However, Rhea says she is tired of the negativity and now she wants to become "Massi" of Prachi's child.

Rhea regrets that she lost everyone because of her negativity while Prachi won over everyone with her positivity.

She says Ranbeer never loved her but always Prachi.

Holding Alia's hands, Rhea asks Alia to give up and accept their mistake.

Shouting at each other and calling one other "Loser", Rhea says Alia could never separate Abhi and Prachi then how could she think of separating Ranbeer and Prachi?

However, Alia says that if she had separated Abhi and Pragya then they would not have been in a comma together but separated and in different worlds.

When Rhea asks who is the person behind her parents' condition, Alia throws Rhea to the ground.

Meanwhile, Prachi wakes up with a start and demands Panipuri from Ranbeer at 11 at night.

Prachi talks to the baby about how lucky they are to have Ranbeer in their life.

At the same time, Alia is driving at full speed and remembers talking to Rhea a few moments ago.

Alia said that she knows where Rhea's parents are and locks Rhea in the room saying that she is going to kill Pragya while Abhi will survive.

On the other hand, Rhea opens the windows of the locked room and calls Prachi who is talking to her baby.

Rhea informs Prachi about Alia's intentions of hurting their mother and Prachi assures Rhea that nothing will happen to her.

Prachi calls Ranbeer but he does not pick up as he has gone to Panpuri makers' house to get Panipuri for Prachi.

The man's wife agrees to make the Panpuri and when Ranbeer picks up the phone it disconnects.

In the hospital, Alia goes to Abhi and Pragya's room with a bottle of alcohol. She says that Pragya will go to hell while Abhi will survive and they will separate.

Saying so, Alia starts removing the vitals from Pragya's bed while Rhea and Prachi run from their respective places to stop Alia.

Prachi pleads with Alia to not hurt her parents while Alia removes Pragya and Abhi's oxygen masks.

Not finding any help, Prachi breaks the glass and enters the room when doctors also come there.

Meanwhile, Rhea is shouting for help on the roads to reach the hospital when Ranbeer finds her.

In the hospital, Prachi asks the doctors to check on her parents while she also feels pain in her stomach.

© Copyright tellybest.com, 2022, 2023. All Rights Reserved. Unauthorized use and/or duplication of any material from tellybest.com without written permission is strictly prohibited.
Cached Saved on: Wednesday 25th of January 2023 09:29:21 AMCached Disp on: Tuesday 31st of January 2023 06:30:54 PM