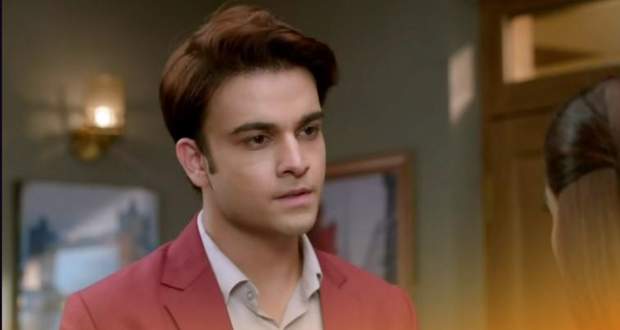 Today's Kumkum Bhagya 11th July 2022 episode starts with Prachi stopping Rhea from leaving the house in the state of pregnancy.

Prachi asks Rhea to think about her baby when suddenly Rhea replies that she requested Prachi to leave the house for the sake of that baby.

While Prachi and Rhea argue, Vikram brings Pallavi downstairs blindfolded to surprise her.

Prachi tells Rhea to stop trying to leave as it is a special day for Pallavi.

Rhea goes inside to see Vikram and Pallavi while Ranbir pulls Prachi in his arms.

With determination showing on his face, Ranbir tells Prachi that he will make Prachi love him forcefully if she refuses to talk lovingly to him.

Dida switches off the lights of the living room at Vikram’s request while Vikram brings a diamond necklace for Pallavi.

Pallavi unbinds the blindfold and sees the beautiful diamond necklace glittering in the darkness.

After Pallavi thanks Vikram with a hug, Dida, Rhea, Ranbir, and others also join and wish her a happy birthday.

The entire family shares a group hug while Prachi stands at the corner alone.

Ranbir brings Prachi with him after spotting her which irks up Rhea due to jealousy.

Prachi promises Vikram that she will make Pallavi’s birthday party the most memorable one.

The next morning, Rhea comes to Alia and tells her that she has planned to insult and throw Prachi out of the house.

Rhea will show as if Prachi is attempting to kill her to-be-born child at the party and blame her for everything.

Just then, Dida enters and suspects that Rhea and Alia are planning something against Prachi by looking at their faces.

Dida informs Sahana about that and decides to keep an eye on both Rhea and Alia so that they cannot do any harm to Prachi.

The party starts with Ranbir staring at Prachi blankly and trying to flirt with Prachi using lame excuses.

Ranbir dances with Prachi instead of Rhea which makes Rhea boil with anger.

As Rhea watches Ranbir and Prachi, she decides to escalate her plan and shows Alia how the plan will be executed.

Rhea tells Alia that they will make the stage wall fall on her so that it looks like Prachi had arranged it intentionally to kill Rhea’s baby.

As Alia asks Rhea to stop mentioning her baby, Rhea reveals that she has been lying about her pregnancy this whole time when she cannot even think of getting pregnant.

Rhea says that she will fall on her stomach after a few months and blame Ranbir for her miscarriage to make him feel guilty.

© Copyright tellybest.com, 2022, 2023. All Rights Reserved. Unauthorized use and/or duplication of any material from tellybest.com without written permission is strictly prohibited.
Cached Saved on: Wednesday 25th of January 2023 06:01:57 PMCached Disp on: Thursday 9th of February 2023 08:06:43 AM