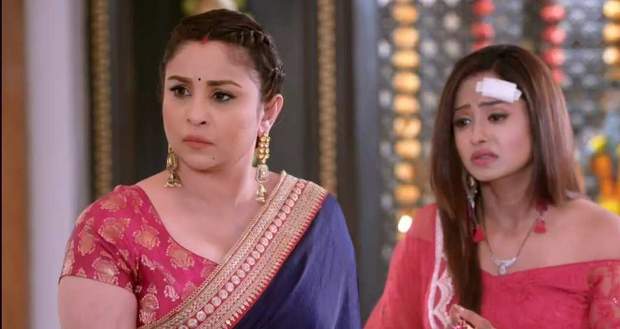 Today's Kumkum Bhagya 11th May 2022 episode starts with Prachi and Sahana talking with each other.

Sahana tries to defend Ranbir but Prachi denies listening to anything in favor of him.

Meanwhile, Rhea comes to talk with Ranbir and tries to blame Prachi for the arguments and fights that take place in that house.

Ranbir gives Rhea the example of her and Siddharth, a dead relationship, and tells Rhea that his and Prachi’s relationship is not like that.

Rhea gets agitated on hearing that and asks Ranbir if he wants to tell her that his and Prachi’s relationship will get to its past state soon.

After Ranbir dodges Rhea’s question successfully, Ranbir calls the private detective and confirms to get evidence by tomorrow.

Meanwhile, Pallavi and Alia plan to throw Prachi out of the house somehow when Vikram comes and advises Pallavi not to control her children’s life.

Sahana comes into Dida’s room with tea where Prachi also sits with them.

On seeing Ranbir passing by, Dida asks him to join them in having tea together, and Prachi starts to leave immediately.

However, both Ranbir and Prachi feel guilty after Dida emotionally requests them to spend some quality time with her.

Ranbir stops Prachi from leaving by holding onto her hand and sits down with her to have tea together.

Seeing that scene, Rhea goes on a rampage and bangs into Pallavi’s room in anger.

Rhea asks Pallavi to call the police immediately and tell them to arrest Prachi as soon as possible as she is going crazy from the fear and tension.

As Pallavi refuses to do so, Rhea threatens to add her name along with Prachi in her suicide letter so that the police arrest her too.

Later, Alia informs Sahana to call Prachi downstairs as the police have come to talk to her.

Prachi comes and gets stunned at hearing the police have come to arrest her.

The police tell everyone that Prachi has to stay in jail until she is proved innocent as her living in that house brings danger to Rhea.