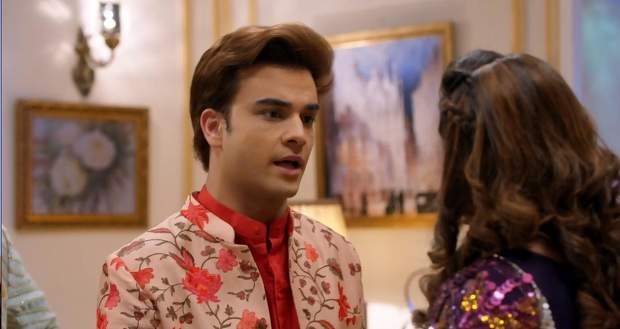 Today's Kumkum Bhagya 11 Nov episode starts with Abhi pranking Mitali to send her out of the room.  Abhi assures Pragya that he will never go against her and Pragya questions him if he loves her or not.

Prachi is lost in thinking about Ranbeer’s proposal, while Shahana starts teasing her for doing secret engagement.

Aaryan overhears their conversation and leaves from there. Elsewhere, Rhea tells Aliya that she will commit suicide if Ranbeer will not get engaged to her.

Aliya slaps her and asks her to stop talking rubbish. She assures Rhea that she will keep Prachi out of Ranbeer’s life.

Aaryan scolds Ranbeer for secretly getting engaged to Prachi. He clears Ranbeer’s misunderstanding and tells him that his family is planning to get him married to Rhea.

Ranbeer gets a huge shock and he decides to talk to his mother. Meanwhile, Aliya tells Rhea that she will get rid of Prachi permanently.

Rhea asks Aliya to not to hurt Prachi as she can’t see Pragya crying for Prachi. Rhea calls Sanju and asks him to come to the party to take away Prachi with him.

Later, Ranbeer hugs Pragya and tells her that he will be his son-in-law for sure. Abhi decides to inform Pragya about Ranbeer and Rhea’s engagement.

Ranbeer searches for Pallavi everywhere and finds her with Vikram and Dida. He requests his family to let him take the decision for his marriage.

Dida forces Ranbeer to marry Rhea but Ranbeer requests everyone to let him marry the love of his life Prachi.

© Copyright tellybest.com, 2020, 2021. All Rights Reserved. Unauthorized use and/or duplication of any material from tellybest.com without written permission is strictly prohibited.
Cached Saved on: Friday 6th of August 2021 01:46:23 AM