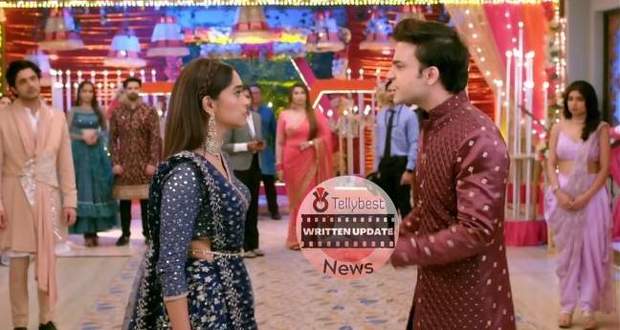 Suddenly, Prachi is back from the flash forward (Another Dream) and Ranbeer asks him to give the glass break.

Prachi then snitches to Pallavi to stop Ranbeer from drinking.

Meanwhile, Sid keeps wondering how he will get Mihika free from Alia and Rhea, when suddenly he gets a call.

Rhea sees Sid getting fidgety and goes towards him to listen to his conversation.

The doctor has called Sid to inform him that the reports are on the way with the courier.

Rhea is angry at not being able to hear Sid's conversation but deciphers from Sid's body language that Sid is busy plotting against her.

On the other hand, Ranbeer keeps persuading Prachi to not get bothered about him and to leave him alone.

Prachi says she will be bothered about him as she is very happy doing it.

Prachi further says whether or not Ranbeer likes it Prachi will be bothered about him and swerves away from giving Ranbeer a kiss.

Shahana asks Prachi why she is blushing.

Prachi tells Shahana about the entire fiasco she did by snatching Ranbeer's drink from him and teasing him.

Meanwhile, Pallavi announces that Sid and Prachi would be performing a dance now.

On the other hand, Rhea tells Alia to not get engrossed with the sangeet as Sid and Prachi have plotted against them and therefore they are so overconfident.

Ali then calls forth the waiter who is keeping a watch on Mihika and gives him the order to do what he was ordered.

Mihika tries to call out Sid but is brutally stopped by the waiter who threatens her with killing her if she refuses to cooperate.

The assassin waiter then kidnaps Mihika while the others are engrossed in dancing at the sangeet.

Ranbeer attempts to dance with Sid but Ranbeer intervenes when suddenly Rhea comes there and dances with Ranbeer.

Sid then tells Shahana who further tells Prachi what the doctor had phoned to say.

Seeing Sid, Shahana and Prachi go to the door together from the dancefloor while Rhea voices her concern to Alia.

Alia then says that Rhea is too obsessed with the trio and dismisses her saying that they will win.

Ranbeer spots Sid and Prachi together and downs an entire glass of alcohol.

Aryan seeing this takes Ranbeer away and makes him take a cold shower.

Shahana seeing Mili with a knife thinks that Mili is committing suicide.

Shahana tackles Mili thinking she is committing suicide when Aryan comes out and Mili and Aryan hug.

Meanwhile, Alia gets a call from one of her goons who threatens her to come to the hotel right away where Mihika is being held, hostage.

© Copyright tellybest.com, 2022, 2023. All Rights Reserved. Unauthorized use and/or duplication of any material from tellybest.com without written permission is strictly prohibited.
Cached Saved on: Monday 21st of November 2022 05:56:33 AMCached Disp on: Thursday 1st of December 2022 01:06:03 PM