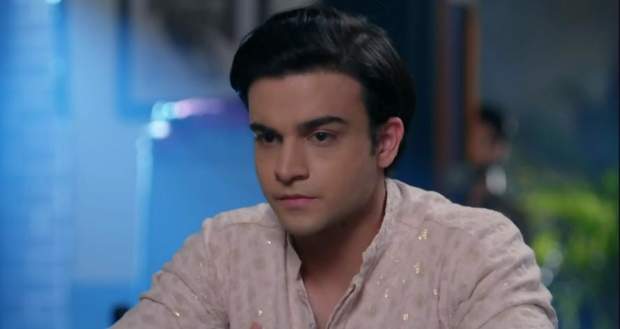 Today's Kumkum Bhagya 12th April 2022 episode starts with Vikram searching for his files and asking Pallavi about their whereabouts.

Pallavi tells Vikram that the file is inside the same cupboard where Nick is hiding which makes Nick freeze in fear.

However, as Pallavi tries to open the cupboard, she notices that it is locked and Vikram leaves to bring a spare key.

Ranbeer comes inside and unintentionally vents out his anger on Pallavi which makes Pallavi more bitter towards Prachi.

After asking Pallavi to tell Prachi not to interfere in his work, Ranbeer leaves. Pallavi tries to taunt Prachi but Prachi asks her to stop Ranbeer from chasing the killer.

Pallavi blames Prachi for taking away Ranbeer from her which makes Prachi gravely upset.

Meanwhile, Sahana comes into Prachi’s room to tell her about Aaliyah and Rhea but gets engaged in comforting Prachi after she spots her crying.

At the same time, Rhea calms down after doing meditation and decides to open up Nick from the cupboard and hand over the money to him.

Sahana spots Ranbeer angrily howling at the police officer and requesting him to find out the culprit as soon as possible.

Ranbeer tells Sahana that he cannot calm down until he catches the culprit and informs her that she is also included in the list of suspects.

Hearing Ranbeer’s words, Sahana gets upset and bumps into Dida who gets hurt in the knees from the collision.

However, Nick gets inside after snatching the money from them as he spots Sahana there.

Later, Ranbeer feels restless and begins to vent out his anger by hitting on the boxing bag with his injured hand.

Prachi comes and gets shocked to see Ranbeer in that state.