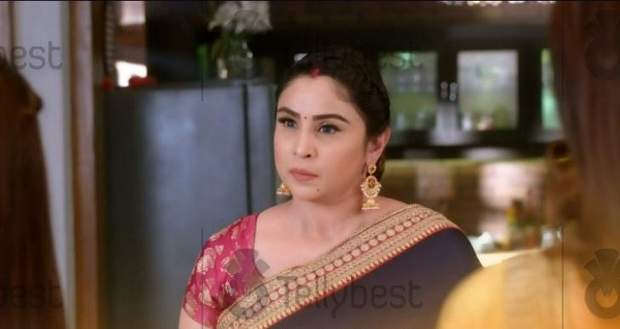 Today's Kumkum Bhagya 12th August 2022 episode starts with Ranbir announcing to everyone that until Sid comes home, everyone must give their phones to him as no one is allowed to contact him.

Rhea and Alia unwillingly give their phones to Ranbir along with other family members which Ranbir locks inside a shelf.

After giving Dida the key safely, Ranbir says that the truth will come out once Sid comes there.

Later, Rhea seems to be irritated due to anger as Alia calls her an idiot for taking Sid’s name.

Alia says that Rhea acts impulsively and does not think of the future when she plans something.

As Shaina tries to stop Rhea and Alia from arguing with each other, both of them ask Shaina to shut her mouth completely.

Meanwhile, Prachi asks Ranbir why he is not questioning her after Rhea’s allegations about her character.

Ranbir says that he will hear only his heart’s opinion and believe whatever his heart suggests to him this time.

Ranbir says that nothing bad would have happened if he did not suspect Prachi in the past and ruined their relationship.

This time, Ranbir tells Prachi not to cry anymore because he is there by her side and if she cries, it should be because of happiness.

Prachi sees Ranbir crying and wipes away his tears asking him what his reason is for crying.

Just then, Pallavi and Ranbir come and comfort Ranbir while saying that they are on Prachi’s side and believe in her.

Dida and Sahana come and give prasad to everyone but Rhea refuses to take it and walks away.

Rhea comes into Alia’s room and asks her how she can sleep while Rhea’s life is about to crumble.

Seeing Alia scolding her, Rhea says that she should kill herself now that no one is on her side which shocks Alia.

Later, Rhea comes to the living room and accepts Dida’s prasad when suddenly a mobile begins to ring.

Vikram opens the shelf and receives a video call from Sid after taking out his phone.

After asking Sid to switch off his phone until he reaches the house, everyone takes back their phones.

Prachi tells Rhea that her dirty allegations do not work on her anymore now that the whole family is on her side.

As Rhea talks about evidence, Prachi announces that she will conduct a DNA test on her baby and prove that it is Ranbir’s child.

© Copyright tellybest.com, 2020, 2021. All Rights Reserved. Unauthorized use and/or duplication of any material from tellybest.com without written permission is strictly prohibited.
Cached Saved on: Sunday 2nd of October 2022 06:12:07 AMCached Disp on: Thursday 6th of October 2022 03:43:22 PM