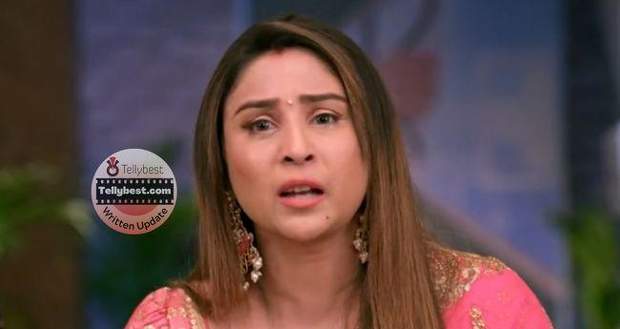 Today's Kumkum Bhagya 12th December 2022 episode starts with Ranbir making fun of Pallavi as she tries to check on him and his condition.

Vikram says they need to view Ranbir's horoscope with an expert to predict any bad omens.

Ranbir makes fun of the statement which makes Pallavi angry as she gets him on his arm.

Acting overdramatic, Ranbir says that Pallavi has put marks on his arm through her hit.

Vikram supports Pallavi and tells everyone that Pallavi did not do such a thing while Ranbir asks Shahana to check his arm.

Pallavi says that Sahana will willingly blame her even though it is not her fault which makes everyone laugh.

Dida checks Ranbir's arm and scolds Pallavi for making marks on his arms through her hit.

While everyone makes fun of Pallavi and Ranbir, the doctor enters the room and asks everyone to shift to the waiting room.

The doctor says that they should thank Prachi for making so much effort to admit Ranbir to the hospital and help them with his treatment.

Saying how Ranbir's heartbeat got stabilized when Prachi held his hand, the doctor says that that can be only the power of love.

Pallavi, Vikram, and others leave the room and bump into Prachi while moving to the waiting room.

Prachi looks at Pallavi and tells her that she needs to go inside to hand over the medicines to Ranbir.

As Pallavi nods her head, Prachi enters the room and faces Ranbir with a smile.

Ranbir and Prachi begin to argue cutely which makes the doctor laugh and appreciate the loving relationship between the married couple.

Pallavi watches Prachi and Ranbir laughing along with the doctor and thinks about how she always blames Prachi for Ranbir's misery.

Pallavi searches for Rhea and refuses to listen to her excuses about Prachi being with Ranbir.

Meanwhile, Ranbir asks Prachi what she was doing in that warehouse with Sid.

Prachi remembers Sid's warning and does not tell the truth to Ranbir as Mihika is still under the radar of Alia and Rhea.

Ranbir gets offended after Prachi refuses to tell him the truth and asks her to leave the room.

Prachi tries to take care of Ranbir but he pushes her away and calls the nurse to assist him.

On the other hand, Pallavi confronts Rhea and Alia and asks Rhea why she is not with Ranbir.

Pallavi says that Rhea does not make any efforts to be with Ranbir and suspects that her concern and care for Ranbir are fake.

Alia tells Rhea that Pallavi's behavior is not a good sign and they have to prepare a backup plan to save themselves.

Aliya enters an unknown room and starts to choke someone with the blanket while they are asleep on the bed.