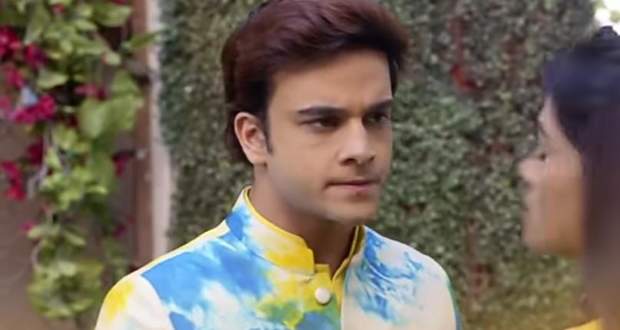 Today's Kumkum Bhagya 12 January 2021 episode starts with Purab asking Abhi if he wants to be with Pragya or not.

Abhi replies that he is marrying on his own will and leaves while Aaliya comes there and confronts him.

Ranbir goes after Prachi and confronts her saying that he knows she is breaking up with him as per Rhea's commands but she denies saying that she is doing it on her own.

Ranbir says that he won't get away from her even if she bad mouths him cause he loves her.

Prachi tells him that she will use her force if he stops her next time and leaves.

Later, Rhea thinks that she will tell Meera to back off from the wedding and goes after her while Aaliya hears her.

Rhea is about to talk to Meera while Aaliya comes there and tells her that Abhi wants to talk to her about something she said in the morning.

Aaliya takes Rhea to a room and tells her that she is selfish.

Rhea says that she is at least not a bad sister and aunt like her which angers her and she raises her hand to slap her but stops.

Aaliya tells that what she wants will happen while Rhea says that she accepts her challenge and goes.

Elsewhere, Saritha confronts Pragya while she replies that she is not going to Abhi's wedding the next day.

Saritha calls Baljeet and tells her about it while Baljeet suggests her to seek Prachi's help.

She reminds her that the auspicious time for marriage is 3 pm and disconnects the call.

Elsewhere, Prachi wonders how Ranbir knows about Rhea telling her to break up with him while Ranbir plans to get the truth out of Sahana somehow.

Next day, Ranbir and Jai go to market to kidnap Sahana.

Sahana makes a bet with Saritha to not speak for 100 rupees when Ranbir and Jai kidnap her.

Ranbir asks her why Prachi wants to break up with him while she accidentally slips that Prachi made her promise to not tell the truth.

Ranbir tells her to just move her head to his questions and confirms that Rhea is behind everything.

© Copyright tellybest.com, 2020, 2021. All Rights Reserved. Unauthorized use and/or duplication of any material from tellybest.com without written permission is strictly prohibited.
Cached Saved on: Thursday 15th of April 2021 08:17:54 PM