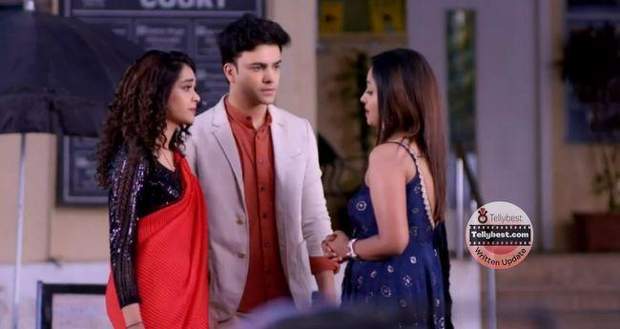 Today's Kumkum Bhagya 12th January 2023 episode starts with Prachi running after Alia who has escaped from the hospital after removing the oxygen masks of Abhi and Pragya.

Prachi sees Alia in a car and decides to stop her but Alia runs the car into Prachi who is saved by a stranger.

Alia says that both Prachi and her child will die together while Prachi stands with an axe-like tool to hit her but Alia's car starts leaking and a cigarette butt that was lying down starts catching fire to the car's diesel.

Alia is locked in the car while the fire starts spreading towards her and Alia shouts for help.

However, Prachi breaks the glass of the car and saves Alia because of humanity.

Prachi curses herself for saving Alia but says that she is helpless as she is bound by Pragya's teachings.

Prachi tells Alia if anything happens to her parents then she will not spare Alia, however, the nurse comes out and informs Prachi that her parents are dead.

Alia gets happy hearing that Pragya is dead but soon it turns to sadness when she realizes that she has also killed her brother.

The police come and arrest Alia and Prachi says that the police will find enough proof in the CCTV footage.

Later, Prachi is crying in the middle of the road when Ranbeer and Rhea come there and Prachi informs Rhea about their parents being dead because of Alia.

Prachi says they will not kill Alia but will make her suffer by killing her daily the way Alia suffocated their parents to death.

Ranbeer sees the emotional bond between the sisters and also remembers his bond with Pragya and Abhi.

Prachi pledges that Alia will get her punishment on the thirteenth day after their parent's death.

After some days, Prachi and Rhea are mourning Abhi and Pragya's death while the sad and emotional moments play with "Mai ni mai re aaye jo teri yaad" song in the background.

Ranbeer asks Prachi to get up from the mourning as it is court's timing.

In the court, Alia says that she did not kill Abhi and Pragya while her lawyer defends that Alia did not do anything as she was not in her senses.

Prachi clarifies Alia went to the hospital with the clear intention of killing her parents and her lawyer even shows the proof.

The court then holds Alia guilty of Abhi and Pragya's murder and sentences her to 14 yrs in jail.

Alia leaves with the police while Prachi feels proud after getting justice for her parents.

The lawyers start arguing between themselves over Rhea changing sides and making Alia lose the game.

Later, Dida blesses Rhea to find a good life partner soon as she has changed for good.

Rhea regrets her past decisions and says she could not see past her revenge on Prachi and begs forgiveness from everyone.

Rhea says that nothing bad will ever happen to the Kohli family, Prachi and her baby as she will go away from here.

Prachi stops Rhea from leaving saying her baby needs its aunt while Rhea insists to go.

Rhea says that she has to go to maintain the relationship and the love they have now.

© Copyright tellybest.com, 2022, 2023. All Rights Reserved. Unauthorized use and/or duplication of any material from tellybest.com without written permission is strictly prohibited.
Cached Saved on: Wednesday 25th of January 2023 02:53:23 PMCached Disp on: Monday 6th of February 2023 04:55:17 AM