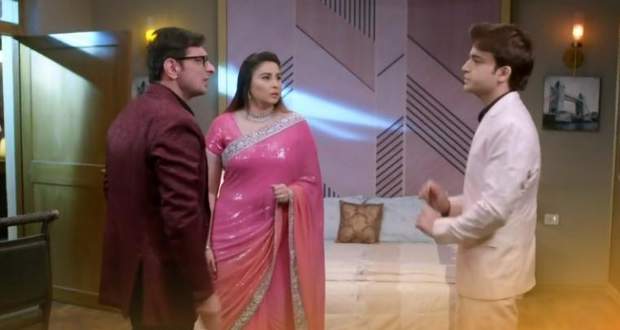 Today's Kumkum Bhagya 12th July 2022 episode starts with Prachi thinking about Ranbir’s statement about introducing her as his life partner.

Ranbir silently stands by the door and watches Prachi take out two beddings for babies from her closet.

Prachi talks with the baby and asks them whether they will have a brother or sister as she is confused about which one to gift Rhea.

Ranbir listens to Prachi’s conversation with their baby and leaves the room when Prachi suspects his presence in the room.

Promising Prachi that he will be there to love their child, Ranbir proceeds in his plan to anger Vikram.

Stanley asks Vikram to go into Ranbir’s room as he is waiting for him there to talk about something important.

Pallavi also follows along with Vikram to know what the matter is.

As Vikram and Pallavi enter the room, Ranbir prepares himself to lie to his parents and says that he wants to have an important talk.

Ranbir tells Vikram that his dream project cannot succeed anymore because he has made a mistake and ruined the project.

Vikram and Pallavi get shocked on hearing Ranbir and ask what the matter is in detail.

Ranbir casually tells them that he was drunk on alcohol and made a mistake that completely destroyed the project.

Before Ranbir can utter any further words, Vikram lands a tight slap on his face and asks him to get out of there.

However, Ranbir acts like a punk and asks Vikram not to overreact to that trivial matter.

This time, Pallavi erupts in anger and asks Ranbir to immediately get out of the room which Ranbir follows.

Meanwhile, Prachi tells Rhea and Alia that she will leave the house the next morning and gifts the bedding to Rhea.

Rhea asks Prachi to get out at the earliest and leaves without opening the gift.

Vikram somehow convinces Pallavi to rejoin the party as all guests are waiting for them.

Later, Stanley bumps into Sahana and both start to bicker with each other.

To make it clear to Stanley that Ranbir and Prachi are in love with each other, Dida takes them to Stanley and asks him to stop pursuing Ranbir.

Ranbir walks away while being submerged in thoughts which Prachi notices and decides to find out.