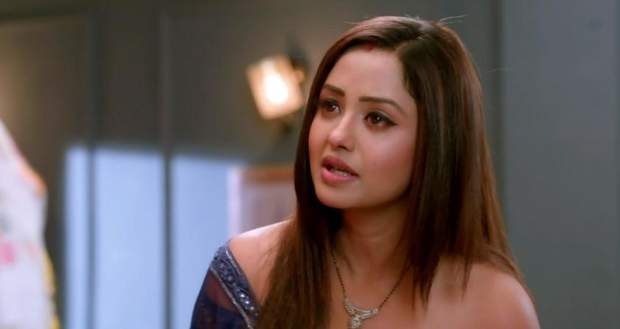 Today's Kumkum Bhagya 12th May 2022 episode starts with the police telling Prachi that she is arrested.

Rhea mocks Prachi saying that she deserves to stay in jail only.

Meanwhile, Sahana tries to stop them but the police ignore her and handcuff Prachi.

Just then, Ranbir comes there and announces that he has proof of Prachi's innocence which shocks Rhea and Aaliyah.

He gives the police officer a file while Rhea tells the inspector that he should not free Prachi as she is still a threat to her.

However, the police inspector tells her that the attacker is Aaliyah while showing a picture of Aaliyah coming inside the house with a toolbox in her hand from the file.

Aaliyah makes an excuse that she was using the tools for a problem in the house and the police leaves.

Later, Rhea talks to the moon and climbs the railing of the terrace when Aaliyah spots her.

Thinking that Rhea is about to jump, Aaliyah tells Rhea to climb down while Rhea assures her that she won't die before completing her dream of winning Ranbir.

Further, Aaliyah scolds Rhea for trying to commit suicide while Rhea retorts that she will never do that and goes to shower.

At the same time, Aaliyah spots Prachi coming toward her warns her to start away from Rhea.

Ignoring Aaliyah's threats, Prachi goes to Rhea's room and takes her saree from there while Rhea notices her leaving her room.

The next day, Rhea is getting ready when she finds the Mangalsutra missing from its usual place and thinks that Prachi stole it.

Going to the breakfast area, Rhea starts demanding her Mangalsutra from Prachi while accusing her of being a stealer.

The family comes to the hall while Rhea announces that Prachi stole her Mangalsutra the previous night.

Unnerved by Rhea's threats, Prachi reveals that she was there to take her saree that the laundryman had misplaced.

However, Prachi stops her and further lectures her about the importance of Mangalsutra while Pallavi, Dida, and the rest of the family look on.