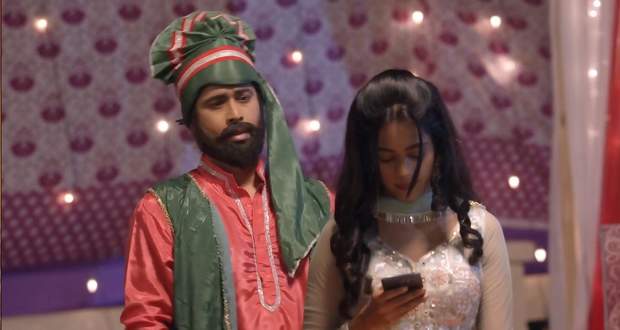 Today's Kumkum Bhagya 12 Nov episode starts with Ranbeer begging his family to let him marry Prachi. Dida says that Prachi is playing with his feelings and ruining his relationship with his family.

Dida feels unwell and Vikram shouts at Ranbeer to leave the room. Meanwhile, Aliya and Rhea ask Sanju to execute the plan to make Prachi away from Ranbeer.

Ranbeer feels broken on recalling that his family doesn’t want him to marry Prachi. Prachi sees Ranbeer crying alone and she hugs him to calm him down. She promises Ranbeer that she will always be with him till the end.

Aliya asks Sanju to disguise as an unknown man to kidnap Prachi from the party. Later, Sarita tells Abhi that Pragya loves her husband a lot.

Abhi gets a wound on his hand while cutting an apple. Prachi arrives there and gets angry with him for being so careless.

Pragya sends Prachi somewhere else and questions Abhi about his intention of telling Prachi the truth.

Sarita asks Prachi to come with her, while Pallavi asks Ranbeer to get ready for the Raavan Dehan. Sanju witnesses Prachi alone and moves towards her, while Sarita warns him to not to stare Prachi.

Sanju makes Prachi unconscious by making her smell something and hides her in a big bag. Sarita questions him about Prachi and follows him to check his bag.

Sarita makes a call to Prachi and hears her phone ringing inside the bag, She then gets a clue that the unknown person hid Prachi inside the bag.

© Copyright tellybest.com, 2020, 2021. All Rights Reserved. Unauthorized use and/or duplication of any material from tellybest.com without written permission is strictly prohibited.
Cached Saved on: Sunday 9th of May 2021 09:32:26 PM