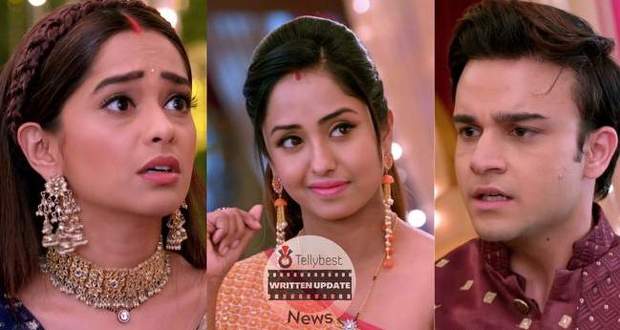 So far in the story of Kumkum Bhagya, Prachi has laid a trap to expose Rhea and her fake pregnancy to the family by asking her to go for DNA reports to prove that she is indeed pregnant the way Prachi has to go through.

However, Alia thinks that she has saved Rhea by asking the doctors to do a fake test and change the reports.

What Alia and Rhea do not know is that Prachi heard their conversation and got Rhea's real test done.

Now Prachi is waiting for the reports and has given Shahana the duty to collect the reports at the first hand.

Meanwhile, Prachi and Sid's sangeet ceremony has started and Sid has blackmailed Alia to bring Mihika to the function else he will not do the rituals by involving Pallavi in his conversation.

The long dream of Prachi confessing her love for Ranbeer and exposing Alia and Rhea with the help of Sid disheartened the viewers as the story was again running on a dream and not a reality.

In reality, a goon has kidnapped the waiter and Mihika whom Alia hired to kidnap Mihika.

The goon is currently blackmailing Alia to come and meet him.

© Copyright tellybest.com, 2022, 2023. All Rights Reserved. Unauthorized use and/or duplication of any material from tellybest.com without written permission is strictly prohibited.
Cached Saved on: Monday 21st of November 2022 01:15:05 AMCached Disp on: Monday 5th of December 2022 01:13:25 AM