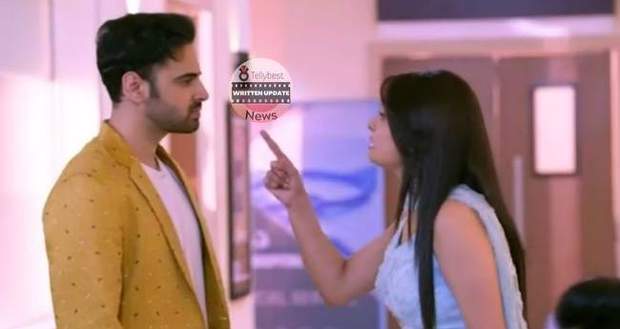 Today's Kumkum Bhagya 12th October 2022 episode starts with Prachi and Sahana discussing what they saw and confirming that something is indeed fishy about Rhea and Alia.

Prachi tells Sahana that she heard Rhea booking a deep tissue massage for herself but later Alia said that Rhea was booking it for her.

At the time she called the spa, the booking was made under the name of Rhea Kohli and they also saw a glimpse of Rhea there.

Prachi tries to connect the dots while Sahana says something is wrong with Rhea’s pregnancy.

Suggesting that they see Rhea’s pregnancy reports, Prachi says that she doubts that Rhea is actually faking her pregnancy.

As the question of the marriage comes, Prachi decides to stimulate Ranbir by making him jealous to the point where he stops the marriage by himself.

Meanwhile, Pallavi calls the panditji to the house and asks him for the accurate dates while Dida questions what she is doing.

Ranbir and Aryan secretly eavesdrop on Pallavi and Dida’s conversation where Pallavi says that she wants to do everything according to the kundali.

Pallavi says that even though so many marriages happened in the family, no one is happy because they did not fulfill the rituals within the “muhuraat”.

Ranbir gets confused on hearing Pallavi’s statement and wonders why his mother became such a religious person all of a sudden.

Moreover, Pallavi tells Dida that she does not want any trouble in the life of Prachi’s child and wants to ensure everything is done perfectly.

As Pallavi starts walking in their direction, Ranbir and Aryan hide as they do not want to confront her at that moment.

The next day, the mehndi ceremony starts in the house with guests coming and the living room getting decorated.

Rhea goes to meet Sid and he tells her how Alia threw him out of the car which Pallavi overhears.

Both Sid and Rhea cover up the matter somehow so that Pallavi does not get suspicious.

Rhea spots Wendy among the crowd and decides to confront her for her past statements.

However, Wendy roasts Rhea hard by comparing her to an ancient monster she saw in the Ramayana.

Rhea tries to go after Wendy but Pallavi stops her and tells her to control herself as she will talk to Dida and Wendy after the function gets over.

Ranbir and Aryan wait for Prachi and Sahana to come out and are happy to see them in their beautiful attires.

Aryan's eyes fall on Sid who gives a gloomy look while watching Prachi and does not seem like he is romantically looking at her.

As Prachi comes, Ranbir suggests a mehndi design to her as it is the most beautiful according to him.

However, Prachi rejects the design saying that it is very bad and does not suit her taste.