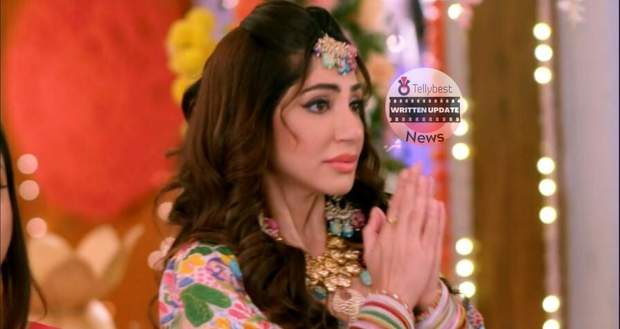 Today's Kumkum Bhagya 12th September 2022 episode starts with Ranbir telling Prachi to let the child have a family and convincing her to marry Siddhartha.

They hug each other out of overflowing love and pain for each other.

Meanwhile, a squad of police gets suspicious over the goons keeping Dida in a Jeep.

They begin chasing the Jeep and the goons inform Alia who tells them to use their mind and escape from the police.

This makes the goons bring Dida into the Kohli mansion and hide her behind a Sofa covering her with blankets.

Meanwhile, Alia and Rhea get worried about Mihika while Mihika manages to escape from the duo.

She roams in the Kohli mansion and sees some people disguised as chefs in the kitchen making something powdery and doing some reactions.

The people spot Mihika and one of them runs to get her.

Mihika sees Ranbir and Prachi and approaches them to tell them everything.

However, the person who ran after her intervenes in their conversation before she can say anything and takes her away pretending to be her driver.

Mihika goes with his act because the man secretly points a gun at her.

Following this, Mihika tells the man that the powder can take someone's life therefore they should tell this to Prachi.

However, the man tells her to not inform Prachi about this and intervenes for the second time when Mihika talks to Prachi.

Later, Prachi sees Rhea while Rhea taunts her that she is very happy for Prachi.

However, Prachi retorts to her that Rhea has no humanity or emotions and does not know how to manage relationships.

Rhea insults her and her baby that Prachi has a sin child of Siddharth and she doesn’t need to learn anything from her.

This triggers Prachi and she slaps Rhea tightly.

Before Rhea could say anything, Pallavi approaches them and take Prachi away with her.

Ranbir agrees that he feels this decision is a death sentence for him but he can not think otherwise.

He further adds that he does not know what else should he do because they both love each other but the situation is not optimum.

Meanwhile, Pallavi and Prachi come into the room where Dida is lying unconscious behind the Sofa.