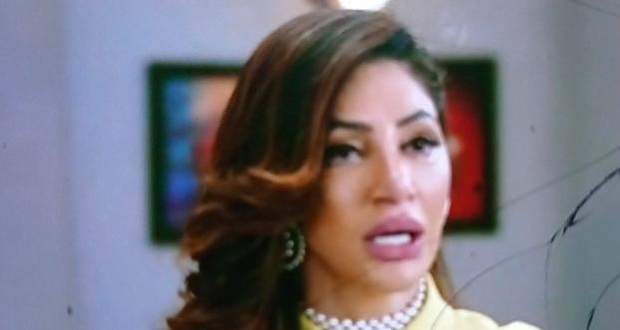 Today's Kumkum Bhagya 13 April 2021 episode starts with Rhea thinking how Mitali, Aaliya and Tanu were tensed due to Abhi gaining his memory.

Meanwhile, Mitali hides Tanu in her room as Aaliya tries to think of a plan to save themselves.

Suddenly, they hear Abhi throwing out their bags and go there.

Tanu hides while Abhi tells Aaliya that he came to know everything she has done with Pragya and tells her to get out of the house.

He calls out to Tanu and also tells her to get out of his house.

He then scolds Mitali for siding with Aaliya and tells her to leave too but she manages to convince him to let her stay.

Abhi tells Tanu to leave and she leave after which he says that anyone who who wants to stay in the house will have to respect and love Pragya.

He tells Dadi that he bring her home the next day not only as the daughter-in-law but also the owner of the house.

Meanwhile, Prachi is crying in her room thinking about Ranbir while Pragya comes there and tells about Abhi coming to take them the next day and leaves.

Prachi cried while Sahana comes there and consoles her saying that there is still time to stop Ranbir from marrying Rhea.

Aaliya goes to Abhi and starts blaming him saying that she turned out the way she is because he didn't give her attention and love after Pragya come into his life.