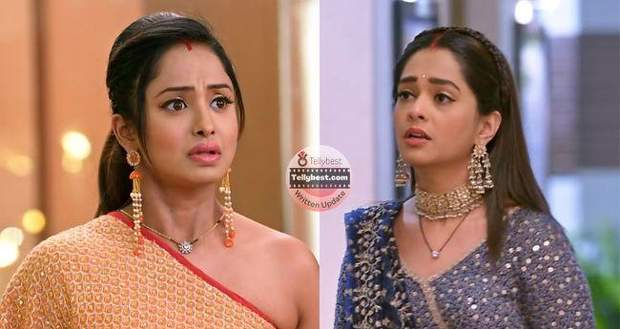 Today's Kumkum Bhagya 13th December 2022 episode starts with Ranbir urging the doctor to take Prachi away till he is here.

Rhea who has overheard Ranbir’s words about Prachi not being his wife scolds the doctor and tells him that she is Ranbeer's wife with a big smile on her face.

She even hugs Ranbir who is lying on the hospital bed and orders Prachi to walk away.

After Prachi walks away, Ranbir orders Rhea to get away from him since it is hurting.

On the other hand, while Sid is crying on the road questioning why he has become trouble for everyone, he notices Alia taking Mihika away in a wheelchair.

Sid pleads with Alia to let Mihika go but Alia yells that she can do anything for her loved ones.

She even threatens Sid to keep quiet otherwise Mihika will die at a young age in a cold voice.

While Sid looks sad, the goons take Mihika away in the car.

The next morning, while Prachi tells Sahana that they need to reveal the truth to Ranbir now, they hear a knock on the door and Ranbir walks in.

Prachi offers to help Ranbir to go to his room but he urges Rhea to help him as he recalls how Prachi has denied telling him the truth.

Though she does not know what has changed between Prachi and Ranbir, she decides to take advantage.

When Aryan takes Ranbir to his room, Rhea announces she will make breakfast for Ranbir, and Pallavi questions her if she can even cook.

Overconfident Rhea tells everyone that she can cook better than Prachi and walks away.

Later, Prachi is cooking breakfast, and Rhea arrives there and announces she will cook Ranbir’s favorite sandwich.

Prachi even announces that Ranbir and her relationship will never break but Rhea orders her to stay away from her Ranbir.

Afterward, while Pallavi asks Ranbir if he is okay, Rhea and Prachi arrive with sandwiches.

Prachi informs Ranbir she has made his favorite veg sandwich whereas Rhea announces that she has a fruit sandwich.

When Ranbir tries Prachi’s sandwich, he comments it is not so good and announces Rhea’s is best.

Hearing this, angry Prachi walks away while Ranbir orders Rhea to make simple coffee for him and Rhea walks out of the room.

Once Rhea is out of the room, Ranbir complains to Pallavi about the sandwich being very bad.

He even throws the plate away and informs Pallavi that he is doing it as Prachi’s marriage is fixed with Sid.

Rhea who was eavesdropping on the conversation smirks as Ranbir has accepted the truth.

On the other hand, Sahana suggests Prachi talk to Ranbir as he is doing this just because he thinks Prachi is hiding something from him.

Meanwhile, Ranbir orders Aryan to accept his feeling for Sahana.

Later, Pallavi informs everyone that they need to fix Prachi and Sid’s marriage date now.