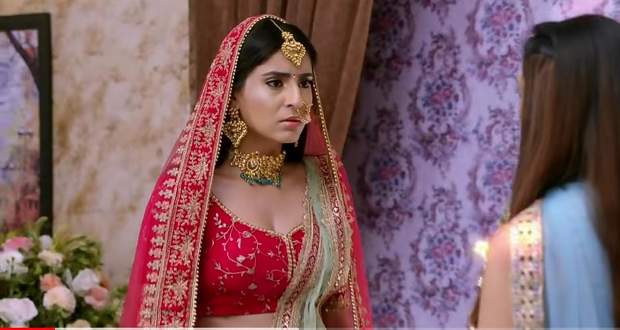 Today's Kumkum Bhagya 13 January 2021 episode starts with Rhea getting agitated thinking about the wedding while Prachi calls her and begs her to stop the wedding.

Rhea says that she will get their parents married anyhow and disconnects the call.

Rhea sees Abhi getting ready for marriage while thinking that she will have to convince Meera to step back somehow.

Baljeet sees them and goes to call Saritha while Pragya cries remembering her moments with Abhi.

Saritha comes there and tells Pragya to do something before it's too late but she ignores her and locks herself in her room.

Baljeet calls Saritha who informs herself that Pragya has locked herself in the room and refuses to go the marriage.

Rhea goes to Meera and tells her to back off from the wedding but she refuses saying that she can't do it.

Further, Rhea tells her that she is breaking all ties with her while Mitali comes there and tells Rhea that Abhi is asking for her in the storeroom.

Elsewhere, Pallavi shows Ranbir the dress she got for Rhea and he tells her that he will give it to her.

He gets a call from Jai and goes to attend it while Pallavi goes after him to give the dress.

Sahana gets angry with Aaryan's message that she is a bad sister to Prachi.

She calls him but he doesn't pick up the call and she goes to meet him.

Pragya sees Abhi's picture and decides to win him back and stop the wedding.