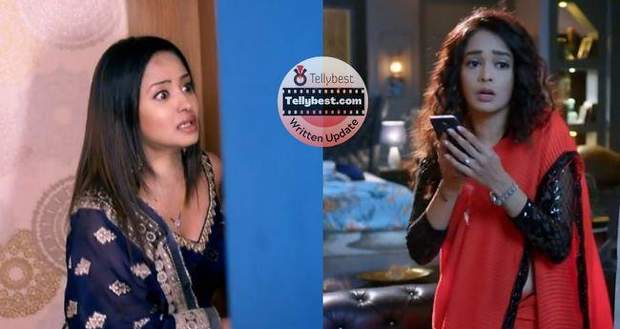 Today's Kumkum Bhagya 13th January 2023 episode starts with Prachi asking Rhea not to leave them as she loves her very much and wants to spend her pregnancy days with her sister.

Rhea says that she has realized that Prachi was always a well-wisher for her but now it is very late to pretend that nothing happened between them.

Coming to Pallavi, Rhea apologizes to her for using her emotions as a mother to her own advantage and says that Pallavi will always be like a mother to her.

Pallavi hugs and tells Rhea that she has always wanted good for her and will continue to do so in the future.

Rhea comes to Ranbir and tells him that she cannot even apologize to him as she has wronged him gravely and feels very belittled in front of him.

Ranbir asks Rhea to look into his eyes, which helps her feel better as she senses Ranbir’s forgiving signals toward her.

As Rhea turns back while leaving, Prachi hugs her and tries to stop her for the last time but Rhea says that she will be fine with all their love staying with her.

Rhea finally leaves after asking Prachi to remember her after she gives birth to her baby.

Meanwhile, Alia gets pushed into jail by the police officers who ask her to mind her tone as she is a criminal.

The inmates in that cell surround Alia and say they need to teach her how she should live in prison.

A leap of four months happens and Aryan is shown to come home after jogging to find the entire living room decorated.

Aryan asks Pallavi and Dida what the occasion is but they do not reveal anything to him.

After Sahana comes there, Aryan tries to get the information from her but fails miserably and Pallavi scolds and asks him to leave.

Pallavi tells Sahana and Dida that no one should come to know that they have held a surprise party for Ranbir and Prachi.

At night, Prachi and Ranbir get ready but remain confused as no one is allowing them to leave their room.

Ranbir stares at Prachi and says that she has done some enchantment magic on him which cracks up Prachi.

Prachi asks Ranbir to stop joking but Ranbir says that he sees her wherever he goes regardless of the situation.

Ranbir says that he loves Prachi even when she is not with him and he cannot see her.

Prachi hits Ranbir in a teasing manner but Ranbir acts as if he is hurt and steals a kiss from Prachi.

Aryan and Sahana bring Ranbir and Prachi to the party venue with their eyes blindfolded.

Everyone surprises Ranbir and Prachi as they come to the party venue and Pallavi announces that the party is to celebrate Ranbir’s first love letter which he wrote on this date.

Ranbir gets embarrassed as everyone asks him to read the love letter to Prachi like a gentleman.

Ranbir reads the letter where he has asked Prachi why she remains in his mind every time and proceeds to ask if Prachi wants to marry him by kneeling in front of her.

Ranbir says that he forgot to write the main thing and says that he loves Prachi to which Prachi also replies with “I love you too”.

Prachi and Ranbir share a romantic dance together when Prachi suddenly goes into labor and tells Ranbir that it is time.

© Copyright tellybest.com, 2022, 2023. All Rights Reserved. Unauthorized use and/or duplication of any material from tellybest.com without written permission is strictly prohibited.
Cached Saved on: Wednesday 25th of January 2023 09:35:38 AMCached Disp on: Monday 6th of February 2023 05:16:41 AM