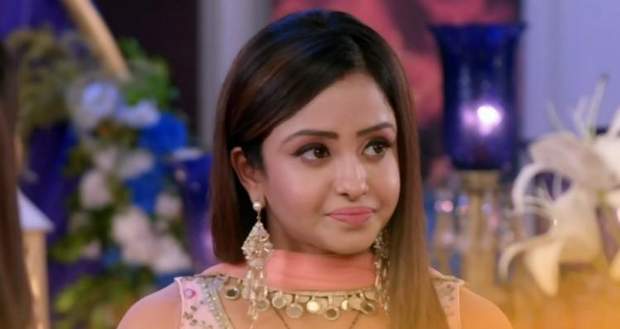 Today's Kumkum Bhagya 13th July 2022 episode starts with Prachi coming to Ranbir after seeing him in distress to ask him what the matter is.

Ranbir tells Prachi that he has hurt Vikram on his mother’s birthday and ruined the mood.

Seeing Ranbir getting emotional, Prachi hugs Ranbir tightly and says everything will be okay while patting his back softly.

Meanwhile, Vikram and Pallavi come back to the party with Vikram acting a bit weird which makes Pallavi anxious.

Vikram takes over the mic and addresses the guests by thanking them for coming to the party and joining his wife’s birthday.

While pointing out how the guests congratulated him earlier regarding his project and brilliant son, Vikram says he has an excellent son indeed.

Vikram announces that from that moment onwards, Ranbir is no longer a part of his company as he has a talent for dancing.

On seeing Ranbir absent from there, Vikram asks Rhea to call Ranbir there so that he also gets to know about his abilities.

Elsewhere, Prachi and Ranbir pull away from the hug with Prachi asking what Vikram is talking about after hearing the announcement.

Ranbir tells Prachi that she has to trust him because he has a reason for doing such a thing.

As Ranbir comes in front of Vikram, Vikram starts to compliment him for his great gift on such a happy day.

Ranbir says sorry to both Vikram and Pallavi for his mistake but Vikram completely ignores it.

Vikram starts a dance with Pallavi and lightens up the mood a bit by dancing together with his wife.

However, Pallavi brings Ranbir and Rhea to the center of the dance floor and makes them dance together.

Rhea clings to Ranbir while Ranbir stands stiffly without making any moves.

After Rhea steps aside as she starts to feel nauseous, Ranbir takes Prachi by her hand and dances with her with his gaze piercing her eyes.

Ranbir tells Prachi that he will confess the truth to her if she promises to tell him the truth about herself.

Prachi agrees but leaves after Ranbir asks her if she will believe him after hearing the truth.