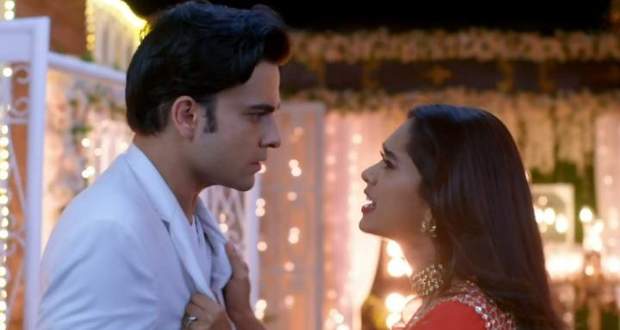 Today's Kumkum Bhagya 13th June 2022 episode starts with Ranbir talking to his lawyer about transferring his properties and factories in Rhea’s name for the purpose of Alumni.

Alia overhears Ranbir’s conversation with the lawyer and gets pumped up with joy.

As Alia leaves, Stanley comes in and tells Ranbir that Alia may have heard everything about his conversation, making them follow after Alia.

Meanwhile, Prachi denies believing that Ranbir is going to throw her out of the house.

Pallavi confirms the news for her and tells her that Ranbir has already bought that cheap house they used to live in together, to give to Prachi.

After Prachi leaves, Rhea discloses the news of Ranbir’s plan of proposing to her with a ring making both happy.

Alia and Rhea bump into each other and share the news they have discovered by themselves.

Ranbir and Stanley observe Alia and Rhea and Ranbir proceeds to talk to Rhea about divorce when he gets a call from Supriya that Sudha is leaving the house.

Hearing that, Ranbir quickly rushes to stop Sudha from leaving as he needs to buy the house from her.

Ranbir ignores Prachi on his way when she approaches him to talk about something.

Seeing that, Rhea feels delighted and takes Prachi with her to tell her something.

Meanwhile, Ranbir succeeds in stopping Sudha and her family from leaving and explains to them his plan to surprise Prachi.

Trying to rub salt on Prachi’s wounds, Rhea announces that Ranbir is going to propose to her at 12 that night after he throws Prachi out of the house.

Rhea says that Ranbir is deeply in love with her and will accept her as his only wife in a few hours.

As Rhea leaves after teasing Prachi, Prachi reveals to Rhea about her pregnancy, making her stop in her tracks.

© Copyright tellybest.com, 2022, 2023. All Rights Reserved. Unauthorized use and/or duplication of any material from tellybest.com without written permission is strictly prohibited.
Cached Saved on: Friday 27th of January 2023 05:20:11 AMCached Disp on: Sunday 5th of February 2023 01:39:06 PM