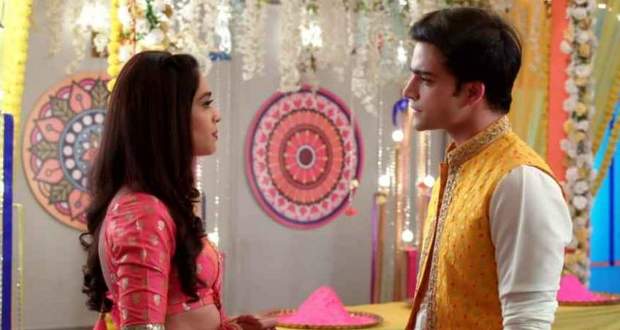 Dida greets Pallavi and Vikram “A Happy Holi” and both parties congratulate each other by smearing color on their faces.

Ranbeer comes and greets everyone while his eyes search for Prachi everywhere.

On Vikram’s reminder, Ranbeer calls Rishi Oberoi (from Bhagyalaxmi) and asks him to arrive at the party at the earliest.

Meanwhile, Prachi calls the doctor for advice regarding her sudden stomach pains to which the doctor asks her to remain happy and do not take the stress.

The doctor advises Prachi to play Holi with organic colors as chemicals will be harmful to the baby’s health.

Fearing getting harmed by the chemical colors, Prachi decides not to play Holi this year but Dida comes and takes them to the Holi event venue.

Giving an excuse to Dida, Prachi escapes from the event venue but bumps with Ranbeer on her way who wishes a loving Holi to her.

However, Prachi acts cold to Ranbeer and asks him to stay away from her.

Ranbeer decides to convince Prachi at any cost on the occasion of Holi as he cannot stay separate from her.

Seeing Dida suspect Prachi’s behavior, Sahana pushes off the table with colors making them crash on the ground, and acts like it was a mistake.

Rhea, Pallavi, and Aaliyah insult Sahana for her mistake and ask her to buy colors from the market to which Sahana happily agrees.

Aada Khan and Karan Wahi spread the craze of Holi with their sizzling performances while Rhea tells Pallavi that she wants to be colored first by Ranbeer.

On the other hand, Ranbeer reminds Prachi of their last year’s Holi and tells her that the first color on her face will be by him.

Prachi remembers the scene of Ranbeer and Rhea together and shuns Ranbeer saying that he has lost all rights to her.

However, Ranbeer answers back by declaring that as long as he loves Prachi, he has the total right on her.

Later, Sahana calls Prachi and informs her about her plan and tells Prachi to play Holi without any tension as she has bought all the organic colors.

On Sahana’s way back, a man even teases her by forcibly holding her hand despite Sahana resisting him not to come close to her.

Amalgamation of Bhagyalakshmi and Kumkum Bhagya

Laxmi (from Bhagyalaxmi) comes to Sahana’s rescue and drives away that man by slapping him.

Both get friendly with each other and Sahana invites Lakshmi to come to the Holi party.

Meanwhile, Ranbeer and the Kohlis welcome the Oberois, Rhea introduces herself as Ranbeer’s wife and dismisses Prachi as an unimportant person.

On seeing Rishi distressed about Malishka, Ranbeer privately talks with him and suggests Rishi break off his marriage with Malishka.

On the other hand, Sahana introduces Prachi and Lakshmi to each other and tells Prachi how Lakshmi helped her in the market.

Hearing the story, Prachi hugs Laxmi and thanks to her for saving Sahana, the three of them proceed to the Holi party after convincing Lakshmi to stay.

Rishabh and Nishant Malkani raise the temperature with their swaggy performances.

Balwinder and the man who teased Sahana plan to enter the Holi party of the Kohlis and leave.

After Rishi and Lakshmi showcase their chemistry with a sizzling performance, all the family members including the Oberois engage in playing Holi in full throttle.

Rhea tries to put color on Ranbeer but he escapes from her by giving an excuse.

Later, Ranbeer tries to convince Prachi by dancing with the others but Prachi walks off from there giving him a cold shoulder.

As Rhea comes to Ranbeer with colors, he takes them and goes to Prachi to smudge colors on her.

Prachi and Ranbeer perform together spreading the message of love everywhere.

Seeing Ranbeer and Prachi intimate together, Rhea throws her plate of colors in anger and explodes with anger after coming into her room.

At the same time, Pallavi and Vikram argue with each other regarding Prachi leading to Pallavi loathing Prachi even more.

Dida tries to make Pallavi understand that Prachi is not the wrong person and Ranbeer loves her.

The episode ends with Ranbeer and Prachi joining others for a performance greeting everyone “A Happy Holi”.