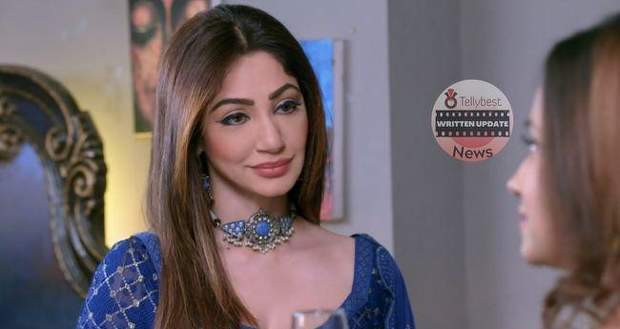 However, as the mehndi designer asks Prachi to choose a design, she chooses the one Ranbir decided for her.

Aryan notices that and searches for Ranbir and tells him about the good news which enlightens Ranbir’s mood again.

Meanwhile, Sahana and Rhea bump into each other and get wet as the glass of water in Sahana’s hand spills over them.

Rhea sarcastically mocks Sahana that she is not civilized enough to act in a disciplined manner.

Sahana laughs it off and tells Rhea that she is not interested in talking to her, which infuriates Rhea but gets interrupted by a guest.

After Rhea leaves with the guest, Sahana hears Rhea’s phone ringing and picks it up in her place after seeing Dr. Madhurima’s name.

Dr. Madhurima informs over the phone that Rhea’s pregnancy reports are arriving at the house and it will cause a blunder if anyone in the family sees them.

Sahana gets confused as to why the reports will cause a blunder and decides to let Prachi know about the matter.

However, as Sahana tries to approach Prachi, she continuously gets interrupted by the guests and Pallavi.

Ranbir comes to the ladies in a happy mood and compliments everyone’s mehndi except Prachi’s.

Prachi reminds Ranbir that it was he who selected the design for her to which Ranbir replies that she should not let others decide for her and make her own decisions.

Getting the opportunity, Sahana informs Prachi about what she heard from the doctor and asks Prachi what is there in the reports.

Prachi replies that the reports will give answers to their questions about Rhea’s pregnancy and consist the truth.

Meanwhile, Rhea fakes her leg sprain and clings onto Ranbir as he supports her to take her to the room.

Rhea tries to pull Ranbir toward him by using tricks but Ranbir asks her to stop as he feels uncomfortable.

Just then, Alia comes into the room after Ranbir leaves and tells Rhea that her pregnancy reports are about to come to the house.

Rhea calls the doctor and gets to know that the reports were sent mistakenly and state that she is not pregnant.

Rhea tells Alia that they are in grave danger as the reports hold the truth about their fake drama.

© Copyright tellybest.com, 2022, 2023. All Rights Reserved. Unauthorized use and/or duplication of any material from tellybest.com without written permission is strictly prohibited.
Cached Saved on: Monday 21st of November 2022 01:34:42 AMCached Disp on: Friday 9th of December 2022 04:25:31 AM