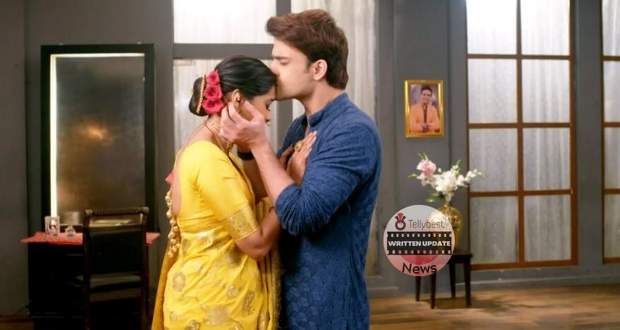 Today's Kumkum Bhagya 13th September 2022 episode starts with Rahul taking Mihika with him to his partners and asking her to tell them the same thing she did to him.

Mihika tells the men that what they are doing is very dangerous and can cause others to lose their life too.

Meanwhile, Rahul puts chloroform on a handkerchief and presses it on Mihika’s nose making her faint.

Just then, Siddharth comes to the kitchen to get water but does not spot anyone as Rahul and his friends hide behind the table along with Mihika.

After Siddharth leaves, they decide to tie up Mihika and hide her somewhere in the house.

On the other hand, Pallavi brings Prachi to her room where the goons have kept Dida and have hidden behind the curtains.

Pallavi asks Prachi to sit quietly while Ranbir brings Siddharth and Panditji with him.

Elsewhere, the police arrive at the Kohli mansion and get greeted by Vikram who makes them do the darshan of Ganeshji and asks them the reason for coming.

Seeing the police in the house, Alia panics hard and thinks about fleeing from there but stops after hearing Vikram talking with them.

The police inform that they have come there to search for some goons who were spotted abducting an old woman.

Vikram states that he has not seen any of the persons in the pictures that the policeman shows him and asks Alia to help him.

Alia swiftly denies knowing them while Rhea gets nervous after seeing the pictures of the goons.

Ranbir spots Vikram with the police and asks him what the matter is.

After Vikram tells him everything and Ranbir verifies that he does not know any of them, Ranbir takes Siddharth with him.

Siddharth gets to know that Mihika is in the house and understands that she has escaped from the goons but the goons have come there while following her.

As Siddharth and Panditji come to Pallavi’s room, she asks Panditji to match Prachi and Siddharth’s kundali and suggest a date for marriage.

Prachi looks at Ranbir with yearning eyes but Ranbir stands at the corner in silence while Panditji announces the marriage date of next week.

While picking up Ranbir’s phone, Prachi spots a hand on the floor and discovers Dida lying there unconscious.

Vikram and the police search for the goons in the house and bump into Rahul and his friends who get tense after seeing the police.

Ranbir, Siddharth, and others carry Dida to the bed while Alia and Rhea also enter the room with horrified faces.

Alia spots the goons hiding and tries to take them out of there with the help of Rhea and a shawl.

However, Prachi notices Rhea and Alia holding onto the shawl and asks if they are hiding something behind it.

© Copyright tellybest.com, 2020, 2021. All Rights Reserved. Unauthorized use and/or duplication of any material from tellybest.com without written permission is strictly prohibited.
Cached Saved on: Sunday 2nd of October 2022 04:53:47 AMCached Disp on: Wednesday 5th of October 2022 05:11:45 PM