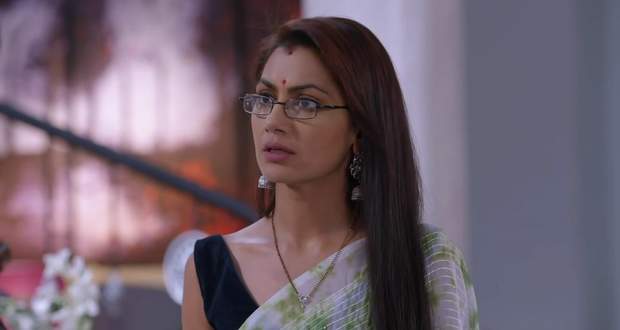 Today's Kumkum Bhagya 14 April 2021 episode starts with Aaliya apologizing to Abhi and asks if he would let her stay if she gives respect to Pragya and starts trying to manipulate him but he doesn't faze.

Meanwhile, Pragya finds out that Prachi has agreed to marry from Bindiya but Pragya tells her that Prachi will not get married.

Pragya informs everything to Saritha and says that something is wrong while Saritha informs her that Abhi might be coming.

She opens the door to reveal Abhi and they share a romantic moment.

They recall their past and Abhi teases Saritha after which they leave for home.

Saritha sees the Diya set off in the temple and thinks that it is a bad omen.

Elsewhere, Vikram is upset with Ranbir as he did not complete his project on time and recalls how he was drunk instead of working.

Prachi calms Vikram while he tells Ranbir to complete the work and call him sir.

Saritha sees the riots happening on the TV and calls Pragya while her Grahpravesh ritual is going on.

Abhi gets Saritha on video call ans shows her the whole ritual happening.