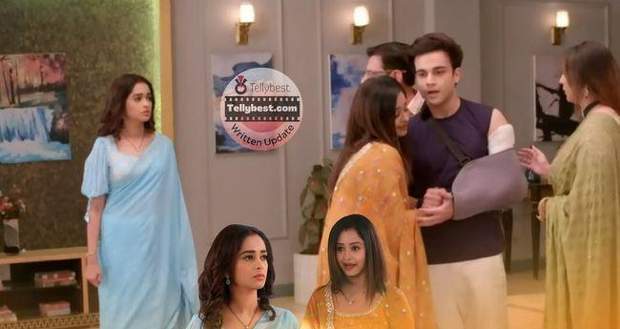 Today's Kumkum Bhagya 14th December 2022 episode starts with Pallavi telling Vikram that there is no other auspicious time after three days.

Rhea becomes happy to hear this news and comes to Prachi to tell her the good news.

Prachi looks annoyed at the news while Rhea is enjoying Prachi’s discomfort.

Prachi tells Rhea to leave but she continues to annoy her and asks her for some bedroom tips to make Ranbir happy.

Prachi gets angry at Rhea and leaves her room while Rhea dances with joy thinking about Prachi leaving so soon.

Meanwhile, Prachi meets Ranbir in the corridor but he refuses to talk to her and tells her to leave him alone.

Prachi follows Ranbir but Rhea interrupts her and tells her that the name Ranbir is deleted from her name now.

She tells Prachi that Ranbir has already asked her to leave him alone and the next day she will get married to Sid and on the third day she will leave this house forever.

However, Prachi ignores her nonsense talk and walks away from there.

Rhea smiles to herself and tells her that Ranbir will come back and make a decision about her.

Meanwhile, Aryan tells Ranbir to stop this marriage and not pretend as if it does not concern him.

Ranbir tells him that he does not care anymore as he thinks Rhea is right about Prachi not being happy with him anymore.

He also tells her about Prachi’s late-night rendezvous with Sid at a deserted place and how she refused to tell him about it.

Just then Prachi comes there asking Ranbir where he had been and tells him about the wedding date.

On being congratulated by Ranbir, Prachi gets angry and questions him for wanting this marriage.

Just then Shahana comes there to call her for Pallavi.

Prachi ignores her and wants to talk to Ranbir but Aliya also comes there and insists Prachi come immediately.

Later, Pallavi introduces Prachi to the jeweller while Ranbir assumes that the jeweller must have brought the next day’s jewellery.

However, his feet freeze hearing Pallavi tell the jeweller to show some Mangal Sutra (Holy Necklace) to Prachi.

Prachi is equally stunned at the request and tells Pallavi she already has one.

Just then Rhea comes there and explains to Prachi that her relationship with Ranbir is over and now she is getting married to Sid now so she will have to wear the Mangal Sutra of his name now.

Rhea’s words pierce like a nail in Ranbir and Prachi while she excitedly selects the Mangal Sutra for her.

Prachi looks at him longingly while Ranbir looks at her without any emotions while thinking about their wedding at the temple.

After a while, Prachi is feeling hopeless thinking everything is slipping from her hands.

Shahana comes to her and encourages her to not give up hope and trust her love for Ranbir.

Meanwhile, Aliya tells Rhea that she has booked honeymoon tickets for Prachi and Sid.

She also tells her that she has arranged for someone there who will steal their passport and gets them locked in jail on charges that can never get them out.

Later, Rhea gives the ticket to Pallavi to give to Prachi from her side.

Afterwards, Pallavi gives the honeymoon tickets to Prachi which shocks her.

© Copyright tellybest.com, 2022, 2023. All Rights Reserved. Unauthorized use and/or duplication of any material from tellybest.com without written permission is strictly prohibited.
Cached Saved on: Wednesday 25th of January 2023 01:50:13 PMCached Disp on: Monday 6th of February 2023 04:33:40 AM