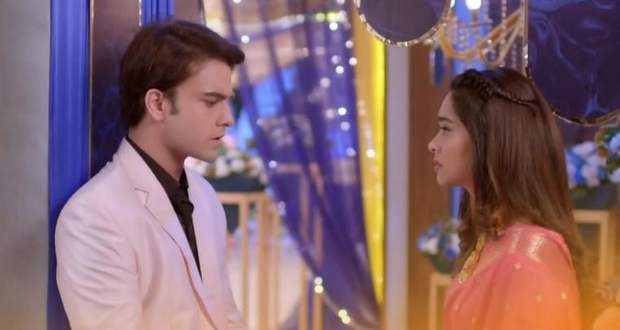 Today's Kumkum Bhagya 14th July 2022 episode starts with Vikram taking a drink from the waiter when Pallavi comes behind him.

Pallavi tells Vikram that she does not feel well seeing her husband and her son fighting with each other and asks him to forgive Ranbeer.

Meanwhile, Ranbir tries to stop Prachi but Prachi tells Ranbir that these talks do not suit him now as he is going to be Rhea’s child's father.

Rhea tells everyone that it is time for cake cutting and goes to get the cake.

In the kitchen, Rhea makes a call to someone and invites her to the party.

Afterwards, Rhea brings the cake to the party while Prachi starts to leave.

Ranbir stops her while Prachi questions him about what is he doing to make it possible for them to live together.

Ranbir tells Prachi that he is hurting his father just to be with her.

Prachi tells him that without the blessings of the family no one can live happily. Besides that, she cannot take away Rhea’s happiness to make herself happy.

Just then Rhea comes with a cake and everyone claps.

In the flashback, Alia remembers Rhea’s instruction of sending Prachi behind the wall after she brings the cake.

Alia has used a wall painting to send Prachi behind it and loosens the walls screws.

Ranbir sees the wall falling and saves Rhea in time.

Later, Alia accuses Prachi of attempting to kill Rhea’s child due to jealousy.

Ranbir defends Prachi but Rhea also joins in with Alia and asks Ranbir to not defend Prachi anymore.

Just then, some women enter the party and Alia tells them that Prachi has tried to kill Rhea’s child.

Ranbir takes Prachi's side while Alia asks Mahua to get the CCTV footage to show Prachi had been tampering with the wall.

Ranbir puts the recording on the tv where Prachi is seen standing near the wall with a screwdriver.

In the light of culminating evidence, Rhea wails loudly accusing Prachi of loosening the screws of the wall.

Prachi explains that she was putting back the loose painting on the wall.

The women from the Sanstha also shame Prachi and call her devilish for trying to kill a child.

Prachi tries to prove her innocence but Rhea is on the roll and questions her for still being in the house while Pallavi also joins in.

Prachi tries to explain herself but Vikram also speaks against her.

Pallavi tells Prachi to leave the house and all those who are her supporters can go as well.

© Copyright tellybest.com, 2022, 2023. All Rights Reserved. Unauthorized use and/or duplication of any material from tellybest.com without written permission is strictly prohibited.
Cached Saved on: Monday 21st of November 2022 04:31:45 PMCached Disp on: Thursday 8th of December 2022 02:28:43 AM