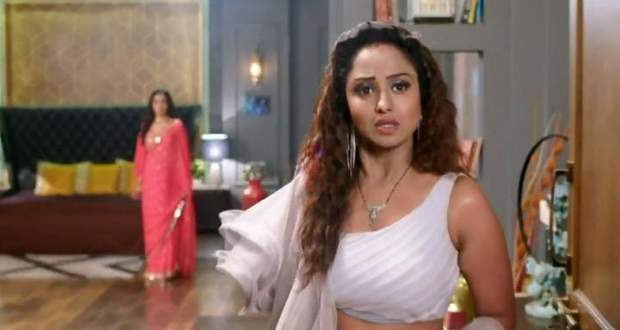 Pallavi spots Ranbir searching for something and asks him what he is looking for.

After Ranbir explains to her the structure of the envelope, Pallavi recalls finding one such thing and asks Ranbir to take it from Rhea.

Ranbir gets nervous on hearing that Rhea has the divorce papers and rushes to get them back.

Meanwhile, Prachi tells Rhea that she is going to become a mother making Rhea freeze in her spot.

Prachi implies that no one will remain happy if Rhea snatches away Ranbir from Prachi.

However, Rhea replies that she does not care about others and will only think about her happiness first.

Prachi tries to persuade Rhea by making her remember their own childhoods where both of them did not get the love of both parents.

Further, Prachi confidently boasts about knowing Rhea’s kind nature when she saved Prachi at the hospital.

With anger in her eyes, Rhea warns Prachi not to play her sister’s card as Rhea considers her as her rival.

In an attempt to try to stop Rhea, Prachi falls to the floor and wakes up from her dream into reality.

Rhea asks Prachi to congratulate her which Prachi does with a straight face and leaves.

On her way, Prachi bumps into Ranbir and gets dragged into a room to talk.

Prachi straightly asks Ranbir if he has bought their old house to which Ranbir replies with a yes.

On seeing Prachi cry, Ranbir offers her his shoulder but Prachi pushes him off and feels the ring in his pocket.

Ranbir gets shocked when Prachi asks if he has a ring but refuses to disclose anything.

In order to keep the surprise guarded, Ranbir tells Prachi that he has bought the house for Rhea which hurts Prachi severely.

Prachi walks out of the room with tears making Ranbir feel bad about what he did.

Meanwhile, Rhea overhears Ranbir and Prachi’s conversation and checks the envelope to confirm the content in it.