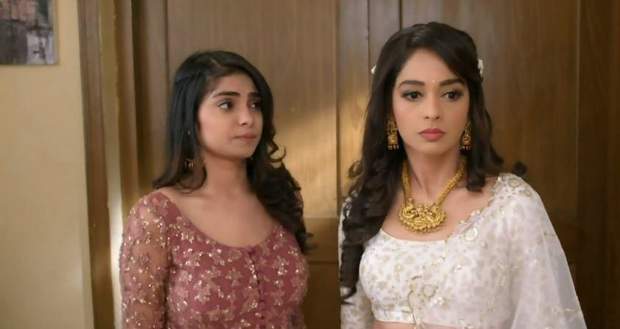 Today's Kumkum Bhagya 14th March 2022 episode starts with Rhea coming after Prachi and insulting her for trying to snatch her sister’s husband.

Prachi rebukes Rhea by mocking her whiny nature and how she calls Prachi her sister at times like this.

Hearing Prachi, Rhea exclaims that she absolutely hates Prachi from her heart to which Prachi gladly tells her to continue to do so.

Burning with rage, Rhea breaks down into angry tears remembering the behavior of Ranbeer towards her.

Aaliyah comes to Rhea’s aid and bursts into anger seeing her crying and wailing like a weak person.

She tells Rhea to act strong and take her revenge upon Prachi by destroying her.

As the context comes up, Aaliyah reveals a plan to Rhea which will completely destroy Prachi and tear apart her and Ranbeer.

Telling Rhea to wait, Aaliyah leaves to get something while Prachi and Ranbeer bump into each other.

Seeing Ranbeer holding her hands, Prachi breaks free and rebukes Ranbeer by telling him to stay away from her.

Ranbeer asks the reason to which Prachi, thrilled with sarcasm, reminds him of his night spent with Rhea.

As Ranbeer tries to tell Prachi his reasons, she shuns him by declaring that it is over between them.

On the other hand, Aaliyah comes back with gloves and color and tells her plan to Rhea.

She explains that the color is very toxic with chemicals and if Rhea smudges it on the face of Prachi, it will ruin her face forever.

Although a bit hesitant at first, Rhea, at last, agrees to execute Aaliyah’s plan but burns her finger as there was a hole in the gloves.

Later, Ranbeer shares his story with Rishi and asks him to follow his heart by going to Lakshmi rather than marrying Malishka.

Ranbeer, Ayush, and Rishi discuss the true essence of love, how it is beautiful and painful at the same time.