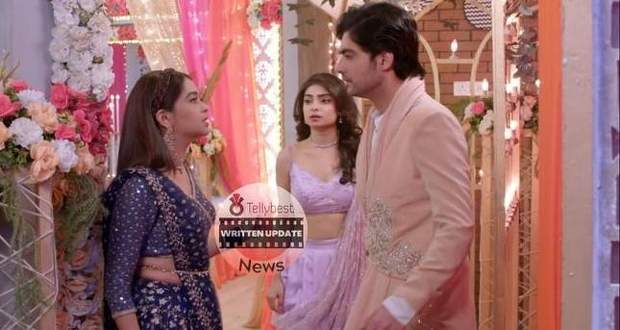 Today's Kumkum Bhagya 14th November 2022 episode starts with Aryan holding onto Sahana while hugging Millie which hurts her sentiments and she runs away from that room.

Aryan goes after Sahana and Ranbir also leaves the room after coming out of the washroom leaving Millie confused.

Meanwhile, Rhea tries to spy on Prachi so that she can get the reports as soon as they arrive but someone pulls away Prachi sneakily.

Ranbir takes Prachi to an isolated area decorated with candles and flowers while Prachi asks why he suddenly attacked her.

Ranbir explains to Prachi that she will not come to him if he calls her in a good way but Prachi refuses his statement.

To check if Prachi is telling the truth, Ranbir asks her to hug him sweetly and Prachi follows his request by sweetly hugging him.

However, Prachi separates herself by saying that she has to go back to the function and proceeds to leave but Ranbir stops her by playing a romantic song.

Ranbir comes from behind Prachi and plants soft kisses on her neck making Prachi blush.

With eyes filled with lust and gestures portraying love for each other, Ranbir and Prachi share a romantic dance.

Meanwhile, Sahana comes out and notices Rhea going after Alia, making her suspect that things are not all right.

Sahana decides to follow Rhea while Aryan stands confused about what he should do.

Rhea asks Alia to stay home and goes to meet the goons by herself to check the issue.

Sahana gets into Rhea’s car trunk and spies on her movements trying to figure out what she will be doing next.

On the other hand, Ranbir writes “Pranbir” on Prachi’s hand and says that they are one name, one soul.

Siddharth receives Rhea’s reports from the courier and shows them to Ranbir and Aryan claiming it to be negative.

Ranbir throws away the report as it does not belong to Rhea.

Dr. Madhurima calls Rhea and informs her that her report has been dispatched but it is the wrong one.

Rhea panics on hearing that her original report is with Dr. Preeti who will send it after checking things.

Rhea calls Alia and asks her to retrieve her reports from the hospital as soon as possible.

Sahana hears this and tries to inform Prachi but finds no network on her phone.

On seeing Alia leave, Prachi understands that something is wrong with the situation.

© Copyright tellybest.com, 2022, 2023. All Rights Reserved. Unauthorized use and/or duplication of any material from tellybest.com without written permission is strictly prohibited.
Cached Saved on: Monday 21st of November 2022 01:48:15 AMCached Disp on: Saturday 10th of December 2022 02:06:48 PM