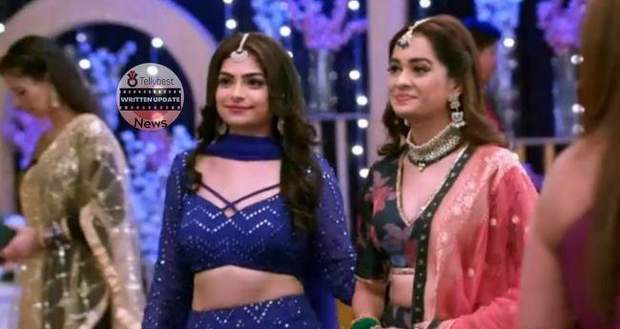 Ranbir tells Aryan with a big smile that he knows how to deal with Prachi.

Meanwhile, Wendy informs Dida that Prachi and Shahana are waiting for their lovers impatiently.

Ranbir then questions Shahana and Prachi about why they are waiting for someone but Prachi urges him to walk away.

Angry Ranbir drags Shahana away and accuses her of turning Prachi just like her.

Shahana however lies that Prachi is waiting for a relative and Ranbir walks away.

Shahana returns to Prachi and questions her if the courier guy is here or not.

Before Prachi can answer, she gets a call from Ranbir, who changes his tone into an aunty's voice and urges her to come to pick her up.

Meanwhile, Pallavi finds Sahana taking the package from the Courier guy and announces she will give the package to Rhea.

After Pallavi walks away, worried Shahana starts searching for Prachi to give her the news.

Prachi is wandering in the hall and overhears Ranbir complementing Prachi’s mehndi in a manly voice.

Ranbir drops his phone when Prachi catches him red-handed.

Prachi tries to confront Ranbir but Ranbir puts a hand on her mouth to keep her quiet as he heard some footsteps.

Afterward, Prachi removes Ranbir’s hand from her mouth and announces there is an S in her mehndi.

Jealous Ranbir rubs the Mehndi off from Prachi’s hand and announces that the color is on his hand now.

She then takes Ranbir to the washroom and questions Ranbir why he is acting like this.

Coming close to Prachi, Ranbir puts his hand on her cheek and starts cherishing it slowly while staring at her.

Ranbir then whispers to Prachi’s ears if she cannot feel Ranbir's love but Prachi replies with a grim face that Ranbir has disappointed her so much that now she does not want to feel anything.

While Prachi and Ranbir are lost in each other eyes, they hear a sound and come out of the washroom to check.

After Ranbir walks away, Shahana tells Prachi about Pallavi taking the package.

Pallavi on the other hand gives the package to Dida to carry to the study room.

While walking with Wendy, Dida collides with Alia who yells at her for not being careful but Wendy questions Alia if she is rude to everyone always.

Alia looks at Wendy sternly and Wendy orders her to carry the package to the study room and Alia reluctantly agrees.

Alia however finds a waiter on his way and orders him to carry the package.

When the waiter puts the envelope on a table till he fills his tray, the envelope flies due to the wind and falls on the floor.

Meanwhile, Pallavi tells Rhea about Dida carrying the envelope and Rhea tries to butter Dida to get the letter but gets irritated hearing Dida and Wendy’s weird jokes.

She then turns to Alia and urges her to question Dida about it but Alia tells her to look for the waiter as he has the letter.

Noticing Alia and Rhea questing every waiter, Prachi and Shahana start following them around.

After telling his dad he does not want Prachi to marry Sid, Ranbir starts dancing with Prachi while Sid watches her happily but Rhea is jealous.

© Copyright tellybest.com, 2022, 2023. All Rights Reserved. Unauthorized use and/or duplication of any material from tellybest.com without written permission is strictly prohibited.
Cached Saved on: Monday 21st of November 2022 06:38:05 AMCached Disp on: Friday 9th of December 2022 04:42:34 AM