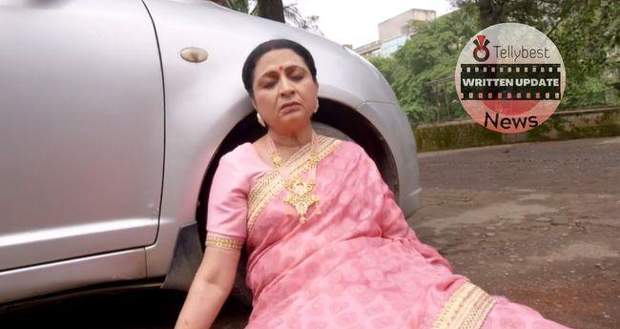 Today's Kumkum Bhagya 14th September 2022 episode starts with Prachi asking Rhea and Alia if they are hiding something behind the sheet they are holding on both sides.

Alia denies hiding anything and distracts Prachi’s mind toward Dida so that no one pays attention to them.

As Alia and Rhea were about to take the goons out of the room, the police arrived with Vikram and the goons hid behind the shelf.

Vikram notices Dida lying unconscious on the bed and asks everyone how she ended up in that state to which no one gives any definite answer.

The policeman says that his suspicion is correct and that Dida was the one who was been abducted by the goons.

Just then, Dida starts to regain consciousness, with everyone relieved to see that.

Alia and Rhea start to walk out of the room slowly as they are afraid of Dida telling the truth.

After Dida wakes up, the police ask her who the person was behind her abduction and how she ended up in that state.

Dida slowly points her finger toward Alia and Rhea who were just about to leave the room.

Alia and Rhea walk out of the room quickly with the police, Ranbir, and Vikram going after them.

Prachi and Pallavi ask Dida about what happened to her to which Dida answers that she is aware of the entire truth.

In the living room, Ranbir asks Rhea to stop in her tracks making Rhea and Alia sweat uncontrollably.

Rhea and Alia say that they did not hear them calling and deny anything about being involved in Dida’s case.

Dida comes and says that she has seen the truth with her eyes and heard it with her own ears and no one can prove it wrong to her.

Telling everyone about seeing Rhea and Alia at the hotel with the goons and a kidnapped girl, Dida says that Alia and Rhea sent their goons to abduct her.

Alia and Rhea refuse the accusations at first but then Alia confesses that she did everything at Rhea’s command.

Rhea gets flabbergasted and accuses Alia back for causing everything.

As Siddharth tries to tell everyone about Mihika, Rhea cuts his words and says that Mihika is back in Mumbai at her request.

Alia explains to everyone how Rhea wanted to reunite Mihika with her family and Dida and that’s why kept Mihika at a hotel but Dida does not believe her.

Mihika appears herself and says that Rhea and Alia are telling the truth as Alia and Rhea have blackmailed her about killing Sid.

Rhea acts like a saint and says that she just wanted Mihika to receive the love of the entire family as she is also the blood of this family.

Dida accepts Mihika after hearing Rhea and Prachi’s pleadings and hugs her.

Rhea celebrates the occasion of Mihika getting accepted and announces that Siddharth and Prachi’s marriage is going to be held next week.