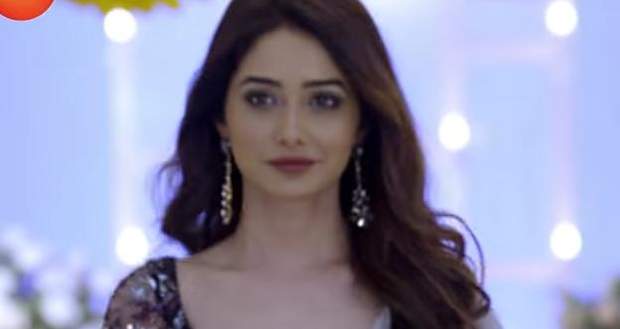 Today's Kumkum Bhagya 15 April 2021 episode starts with Aaliya apologizing to Pragya while Pragya tells her to forget the past and focus on the present.

Abhi gets a call from Vikram who reveals that due to Ranbir not being able to complete the work on deadline they will not be able to do the yearly event that he organises.

Abhi tells him to not worry as he will talk to Juneja and leaves.

Meanwhile, Prachi brings coffee for Ranbir but he gets angry at her and accidentally drops the coffee mug.

Prachi wipes his coat while he tells her that he doesn't need her fake concern and leaves.

She is picking up the pieces of the mug while Rhea comes there and taunts her.

Rhea blackmails her and tells her to not break their deal while Ranbir comes there and asks them what deal.

Abhi romances with Pragya and goes upstairs telling her to pick out his outfit for him.

Tanu comes there while Pragya stops her.

Tanu calls in the police and tells them to arrest Abhi.

Pragya asks her why she is doing it while she accuses Abhi of raping her.

Meanwhile, Ranbir questions Prachi and Rhea while they lie and leave.

Ranbir notices a bracelet and puts it in his pocket.

Pragya says that Tanu is falsely accusing Abhi and the family members agree.

Tanu goes to Aaliya and argues with her saying that she is the one who told her to get close to Abhi and seduce him.

© Copyright tellybest.com, 2020, 2021. All Rights Reserved. Unauthorized use and/or duplication of any material from tellybest.com without written permission is strictly prohibited.
Cached Saved on: Thursday 29th of April 2021 01:06:28 AMCached Disp on: Thursday 6th of May 2021 05:46:07 AM