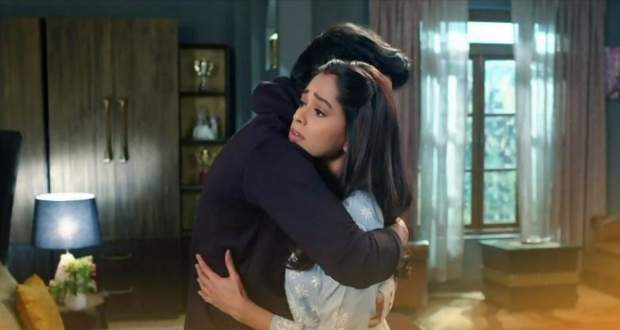 Today's Kumkum Bhagya 15th April 2022 episode starts with Ranbir asking what the matter is with Vikram after he spots him sleeping on the couch.

Pallavi informs that Vikram had taken sleeping pills earlier which is the reason he is sleeping so soundly.

Hearing Pallavi, Rhea gets nervous about Vikram getting overdosed on sleeping pills as they have given him the pills a second time.

Following Prachi, Ranbir enters the room silently but Prachi asks him to stay outside without even looking at him.

As Ranbir asks Prachi how she knew that it was him, she replies that his footsteps are familiar to her ears.

Ranbir comes to Prachi and asks her to accompany him so that he can feel at peace for some time.

Prachi agrees and leaves the room with Ranbir who takes her to the rooftop of the house.

Meanwhile, Rhea panics thinking about getting caught while Aaliyah tries to calm her down.

After careful planning, Rhea and Aaliyah decide to move Nick out of the house after Pallavi goes to sleep.

Rhea releases a sigh of relief as Ranbir was not there and was with Prachi to accompany her.

At the same time, Ranbeer and Prachi feel the cool breeze under the moonlight together and let their arguments rest for a brief interval.

Prachi adores Ranbir as he sleeps while leaning on her shoulder and sheds tears as past memories flood in her mind.

After waking up, Ranbir asks Prachi the reason behind her tears when suddenly a pot falls down by Ranbir’s arm.

Rhea and Aaliyah, who were taking Nick out of the house, quickly hide as the pot falls right in front of them.

However, as they reach the living room, Ranbir and Prachi get shocked to see Nick tied up in his earlier position.

Rhea and Aaliyah act naïve and ask Ranbir what he is doing there.