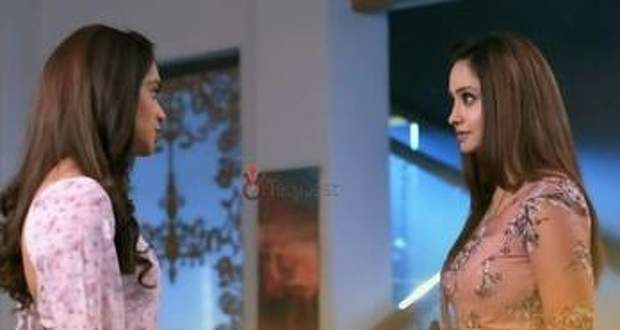 Today's Kumkum Bhagya 15th August 2022 episode starts with Ranbeer, Prachi, Shahna and Aryan getting into the car and getting ready for the DNA test of Prachi and Ranbir’s baby to prove Rhea that she is wrong.

Ranbeer tells Prachi that it is not necessary and he trusts her but Prachi is adamant to prove her right so they set off.

Meanwhile, Rhea thinks she should have not taken her words too far, since the DNA test will reveal Prachi’s innocence.

Pallavi walks into the kitchen and asks her servant to get fresh fruits for the table.

Following she asks Rhea who was about to leave if what she said about Sid the other day is true.

Rhea confronts her that why would she ask now when she was in favor of Prachi that day.

Simultaneously Aliya walks in and intervenes in their conversation and tells Pallavi to not doubt Rhea, but Pallavi is in dilemma.

Suddenly they hear a sneeze and get startled when they see Dida walking in.

She asks for tea and Pallavi says she’ll bring it for her but as Dida goes away they start conversing which Dida eavesdrops.

The four adults reach the hospital for a DNA test but Aryan and Shahna keep bickering like children.

Prachi stumbles by a wheelchair and Ranbeer picks her up.

Shahna also falls but Aryan and Shahna begin quarrelling over it.

At the Kohli Mansion, Dida sees Vikram on the phone and realizes how Pallavi is faking in front of Vikram and is backstabbing him behind his back.

Vikram asks her the reason for her worry and Dida explains that she doubts if Pallavi is with Prachi.

Vikram says that even though Pallavi is easily manipulated she would do anything to protect Prachi and the baby from Rhea.

The DNA test is done and the four of them are getting back in the car but Prachi and Ranbeer are in their romance.

On the other hand, Aliya hires goons to get Sid killed at the international airport and make it look like an accident.

During the little bickering between Aryan and Shahana, Aryan suddenly pulls her close and they have a moment but Shahna pushes him away once they hear Ranbeer calling for them. They finally set back home.

At home, Vikram is resting his head on Dida and rants about his confusion in the family regarding Rhea but Dida tells him to stop thinking about all this and go to the office.

Pallavi comes to Dida with a cup of tea when Dida confronts her about the conversations between her, Rhea and Aliya.

Pallavi gets shocked to hear this from her.

© Copyright tellybest.com, 2020, 2021. All Rights Reserved. Unauthorized use and/or duplication of any material from tellybest.com without written permission is strictly prohibited.
Cached Saved on: Sunday 2nd of October 2022 06:58:50 AMCached Disp on: Thursday 6th of October 2022 04:45:11 PM