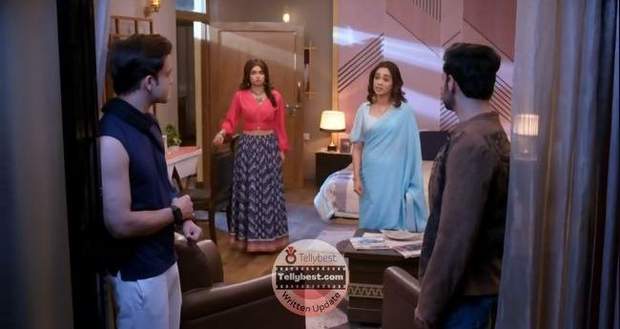 Today's Kumkum Bhagya 15th December 2022 episode starts with Pallavi handing Prachi the tickets to London as a honeymoon gift and asking her to start a new life there alongside Sid.

Prachi gets infuriated on seeing the honeymoon tickets and understands that it is Rhea and Alia’s doing.

Prachi barges into Rhea’s room and begins to ask her why she did such a dirty move thinking she is inside the washroom.

However, Rhea is revealed not to be present in the room while Pallavi spots Prachi there and asks her to sleep early as the next day will be hectic.

The next morning, Ranbir wakes up in his bed and spots Prachi standing in front of him in a white saree with the room decorated in white and red roses.

Prachi says that she thought that he loved her and would stop her marriage with Sid.

Ranbir runs to Prachi and hugs her tightly in his arms but suddenly gets separated from her.

Both Ranbir and Prachi wake up from that nightmare and worry about the message relayed through the dream.

Prachi gets a message which threatens her not to do anything smart if she wants to save Mihika’s life.

Pallavi asks Prachi to get ready quickly as they have to go shopping together.

Ranbir gets ready and decides to go out as he cannot bear to see Prachi getting married to Sid.

Later, Sahana tells Aryan that they need to do something to save the last straw joining Ranbir and Prachi.

Aryan notices Sahana standing too close to him and asks her to go a bit far from him.

Sahana pulls Aryan by his collar and starts telling him about Prachi’s problem while Aryan enchantingly stares at her.

Ranbir returns from outside and gets scolded by Vikram for not resting properly.

Just then, Pallavi and Prachi return from their shopping and give everyone their outfits for the marriage function.

Ranbir’s watch gets stuck with Prachi’s saree as he passes by, making them stare into each other’s eyes.

Later, Rhea and Alia discuss how their honeymoon plan became successful as they made Pallavi give the tickets.

Prachi hears their conversation from outside the room and barges inside to confront them.

Alia and Rhea act oblivious but Prachi says that she heard how they used Pallavi to hand over the honeymoon tickets so that they can send Prachi away.

Prachi warns Rhea and Alia that they will not be successful in their plan and leaves while Alia and Rhea share a mocking laugh.

Prachi worries about her marriage and thinks that it is too late to do anything now.

© Copyright tellybest.com, 2022, 2023. All Rights Reserved. Unauthorized use and/or duplication of any material from tellybest.com without written permission is strictly prohibited.
Cached Saved on: Wednesday 25th of January 2023 07:23:46 PMCached Disp on: Sunday 5th of February 2023 03:06:26 AM