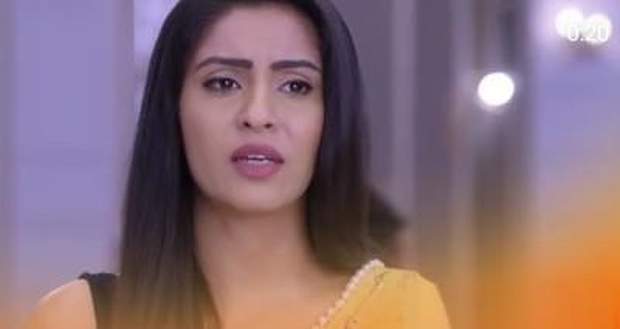 Today's Kumkum Bhagya 15 January 2021 episode starts with Sahana telling Prachi that she has to come with her to save Palak and drags her away without giving a clear answer.

Meanwhile, Jai and Ranbir pick up Palak and drive off to go to the temple.

Elsewhere, Pandit Ji tells that it is time for the bride and groom go to the pooja while Baljeet angrily shouts at him.

Abhi comes downstairs and Baljeet tells her that she won't be able to give him her blessings as it has to come from the heart and her heart does not agree with the marriage.

Pandit Ji again tells to call the bride for the pooja while Tai says that Meera is not in her room.

Baljeet says that Meera left because she reprimanded her but Abhi reveals that he talks to her just minutes ago while Aaliya goes to find her.

Ranbir gets stressed think what would Prachi do after finding out that it was his plan while Jai reassures him that he would have been married to her by that time.

Pahlavi calls him and asks him where he is and he lies to her that he is out to get a gift for the wedding couple.

Meera is looking for Rhea and is about to check in the Storeroom while Aaliya comes there and tells her that Pandit Ji is waiting for downstairs for the pooja.

Aaliya calls Pragya and taunts her while Pragya replies that she is coming to the wedding and disconnects the call.

Elsewhere, Abhi and Purab reveal to Baljeet that the marriage is just a plan to get Pragya to confess her love and that Meera is also with them in the plan.

Meera comes there and Baljeet apologises to her for scolding her and thanks to her for helping Abhi in his plan.

Abhi and Meera do the pooja while he impatiently waits for Pragya.

Saritha comes while Abhi gets happy thinking that Pragya came with her but she reveals that she came alone.