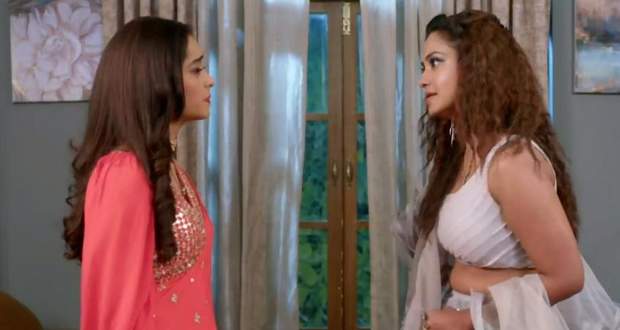 Today's Kumkum Bhagya 15th June 2022 episode starts with Rhea and Alia gawking over the sealed divorce papers and wondering what the papers are about.

Rhea explains to Alia about Ranbir’s plan of replacing Prachi’s every memory with Rhea’s so that they can make a fresh start.

As Rhea proceeds to open the envelope, Pallavi comes there and asks what Alia and Rhea are talking about.

Stanley, who was overhearing the whole conversation, spots the divorce papers on the floor and sighs in relief.

Pallavi asks Rhea and Alia to join her downstairs and all three of them exit from the room.

Meanwhile, Prachi storms into Dida’s room with the news that she is going to leave the house but spots Dida sleeping.

Sahana asks Prachi what she is talking about and asks her to calm down.

Prachi tells Sahana that Ranbir is planning to propose to Rhea at 12 am as he wants to make up for his mistake of leaving Rhea in the past.

As Sahana hears from Prachi that Ranbir has brought that house for Rhea and not Prachi, she feels relieved.

Prachi expresses her sadness on seeing Ranbir replacing all her memories with Rhea’s and decides to leave that house once and forever.

Meanwhile, Stanley succeeds in getting back the divorce papers but gets caught by Alia, Rhea, and Pallavi while being in the room.

Alia decides to call the cops but gets stopped by Ranbir who comes there at the correct time.

Ranbir tells Stanley that he will take Rhea’s signatures on the divorce papers by telling the truth.

Later, at the party, Ranbir asks Rhea to come with him as he has something to tell her and takes her upstairs followed by Prachi and Sahana.

Ranbir kneels down on the floor so that he can apologize properly to Rhea but Rhea and Prachi assume that as a step of proposing.

With several attempts to tell the thing directly, Ranbir struggles to talk about the divorce with Rhea.

Rhea forwards her hands and asks Ranbir to initiate his proposal by making her wear the ring.

Seeing that, Prachi gets offended and walks off from there which Ranbir catches.

Ranbir follows Prachi and gets shocked when Prachi says that she is going to leave the house.