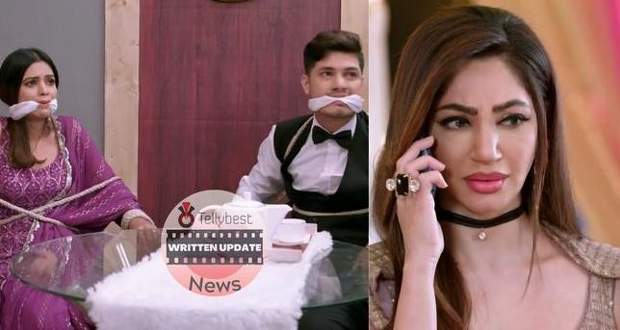 Today's Kumkum Bhagya 15th November 2022 episode starts with Sid telling Ranbir that he is holding Rhea's lies in his hands and still don’t believe him.

However, Ranbir throws the report on Sid and tells him it's not Rhea’s report.

In shock, Sid calls the doctor complaining about the report when she tells him that there was a mistake but the new report will follow soon.

Meanwhile, Aliya has come to the hospital to collect the report which creates a distraction to get past the reception.

In the meantime, Prachi reaches the hospital but does not see Aliya.

Elsewhere, Aryan tells Ranbir that fighting with Sid is not the solution and asks him to declare his love for Prachi to everyone.

Ranbir tells them that everyone is aware of his love for Prachi yet they are making Prachi marry Sid.

Later, Aryan tries to understand the confusion of Sid, Prachi and Ranbir’s triangle when Pallavi comes to them asking about Prachi.

Dida tells Vikram to find a way to cool off Pallavi’s anger before she burst with anger at Prachi’s absence.

Later, Vikram goes to ask Pallavi for a dance and employs Ranbir’s assistance to convince her.

After a while, Pallavi dances beautifully to “Laayi de Mohe Raj wali Odhni”.

Meanwhile, Aliya reaches inside the storage facility of the hospital to find Rhea’s file.

Just then, Prachi also arrives there with the same purpose while Aliya thinks it to be a staff member and hides using the cloak of darkness.

Later, Aliya finds the report and leave before Prachi can see who was there.

However, Prachi realises that Aliya has gotten to the report first and leaves after her.

Meanwhile, Rhea reaches the hotel planning to teach Mihika a lesson but is shocked to find the Waiter and Mihika tied while the goons point the gun at her asking her to give her fifteen lakh rupees or else he will sell her to the highest bidder.

Shahana witnesses Rhea with the goons and overhears them.

Meanwhile, Rhea gives attitude to the Goon but he threatens to kill Mihika if she refuses to pay him.

Rhea gets cornered and requests to give her time to arrange money.

In the meantime, Aryan is lost in his thoughts and gets irritated by Sid's disturbance.

After a while, Shahana calls Aryan and calls him at the blue Orchid hotel. Seeing Aryan leave, Milli also follows after him.

Later, Aliya and Prachi come back home one after another.

However, Aliya is not a novice and calls Pallavi to ask Prachi where she has been loitering around on her Sangeet.

Being instigated, Pallavi questions Prachi and scolds her for being absent.

Prachi tells Pallavi that the time has come that they all know the truth.

Just then, Aliya pretends to have a dizzy spell and snatches the report from Prachi's hand and throws it under the table.

Ranbir also tells Pallavi to put the interrogation for later and entertain the guest who is here and watching them.

Pallavi realises the presence of the guest and tells Prachi to touch up her make-up and join the guest.

© Copyright tellybest.com, 2022, 2023. All Rights Reserved. Unauthorized use and/or duplication of any material from tellybest.com without written permission is strictly prohibited.
Cached Saved on: Monday 21st of November 2022 01:43:09 AMCached Disp on: Saturday 10th of December 2022 02:26:17 PM