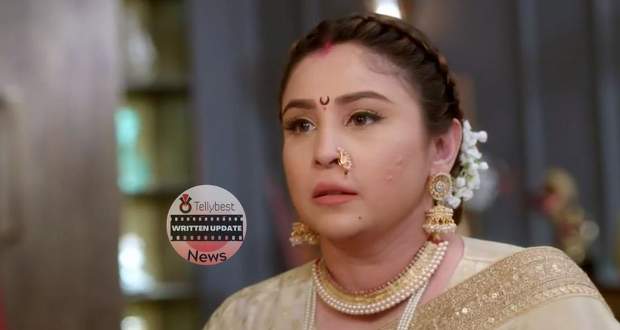 Today's Kumkum Bhagya 15th September 2022 episode starts with Mihika appreciating the news of Prachi and Siddharth’s wedding and deciding to attend it.

Alia and Rhea take Mihika with them with the excuse of showing her dresses.

Prachi stops Ranbir from leaving but Ranbir reminds Prachi how she should have left her job because she was aware of Sid’s feelings for her.

However, as Prachi says she used to earn for both of them, Ranbir feels hurt and says that Prachi is trying to make herself superior to him.

Rhea and Alia threaten Mihika after taking her to their room while Sid comes there and embraces Mihika with love and care.

As Sid says he will reveal everything to everyone, Rhea and Alia call their goons and say they will be living in the house.

Alia announces that the goons will stay as Sid’s office workers and will shoot him and his sister at that instant.

Meanwhile, Prachi acts weird and tells Sahana that she does not care whether someone marries or not.

Sahana does not understand what Prachi means and spots Aryan coming in that direction.

After Sahana orders Aryan to see what Ranbir is doing, Aryan comes and hears Ranbir saying the same thing as Prachi.

Mihika informs Alia and Rhea that she saw some people in the kitchen with guns but no one believes in her.

As Rhea takes Siddharth with him, Alia instructs the goons to take Mihika back to the hotel.

Elsewhere, Ranbir and Prachi trip into each other’s arms while passing each other in the corridor.

As Ranbir and Prachi start walking past each other, Sahana and Aryan try to make them understand their love.

Ranbir and Prachi ask Sahana and Aryan to shut up as they have not experienced love in their life.

Rhea and Alia tease Siddharth by reminding him how he used to like Prachi and still wants to marry her.

After seeing Dida, Rhea thanks Alia for saving her and shares a hug with her.

Dida says that she does not believe in Rhea’s words but Pallavi asks her to have a little faith in Rhea and her efforts.

© Copyright tellybest.com, 2020, 2021. All Rights Reserved. Unauthorized use and/or duplication of any material from tellybest.com without written permission is strictly prohibited.
Cached Saved on: Sunday 2nd of October 2022 12:38:40 AMCached Disp on: Monday 3rd of October 2022 08:27:51 PM