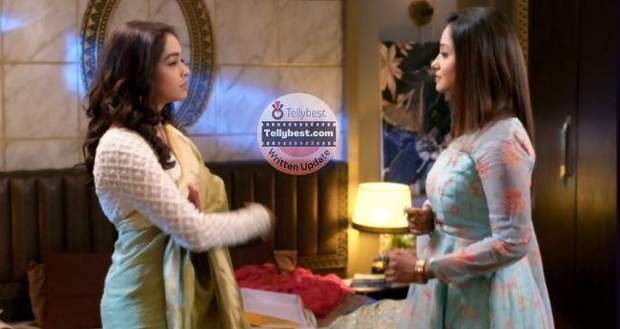 Today's Kumkum Bhagya 16th December 2022 episode starts with both Prachi and Ranbir thinking that it is too late to mend things back to their places and stop the marriage.

At night, Prachi dreams of getting married to Sid by Alia and Rhea forcefully and wakes up in horror as she does not want to do that.

Prachi decides to leave the house so that she can skip her marriage with Sid and proceeds to pack her clothes.

As Prachi walks through the living room with her suitcase, Ranbir spots her and asks her where she is going.

Ranbir asks Prachi if she is escaping from reality to which Prachi answers with a yes.

However, Ranbir tells Prachi that she is thinking selfishly and should care about her child a bit as their future depends on this.

Ranbir says that Prachi is snatching away her child’s future from them by going away from their father and family.

As Ranbir calls Prachi’s move a sin, Prachi asks Ranbir to stop talking and says that she knows well what she is doing and what led her to do so.

Prachi tells Ranbir that he should not talk about mistakes and sins as he has done those enough in his life.

Ranbir says that they are both connected by their karma and will get what the other one has committed in their life.

Ranbir further says that they always come to a point where they are standing in front of each other like that whether in love or hate.

Prachi gets emotional and hugs Ranbir while Ranbir wraps his arms around Prachi and gives her soft pats on her head.

Just then, Rhea comes there and spots Ranbir and Prachi hugging which makes her furious.

Ranbir tells Rhea that he was just explaining to Prachi that she should not leave the house which shocks Rhea.

Rhea asks Prachi if she is trying to run away from the truth without marrying Sid and accepting her mistake.

Prachi gets competitive on hearing Rhea’s taunts and announces that she will marry Sid under any circumstance now.

Prachi returns to her room and gets comforted by Sahana who assures her that everything will be better soon.

The next day, Ranbir watches Pallavi welcoming guests at the marriage function and stares at the rangoli with angry eyes.

Ranbir kicks the rangoli and smudges the color intentionally which gets noticed by Pallavi and she comes to talk to him.

As Ranbir asks Pallavi why she is not angry with him, Pallavi answers that his being angry is justified in many ways.

Pallavi asks Ranbir to look at the positive side of the situation and vision Prachi as happy with her husband and child.

Pallavi says that Ranbir will also let go of Prachi after visioning that as she wants her to be happy.

Rhea comes to take Prachi outside and acts savage on seeing her in her bridal look.

Rhea tells Prachi that they are playing a game where everyone is applying their own strategy to ensure their safety.